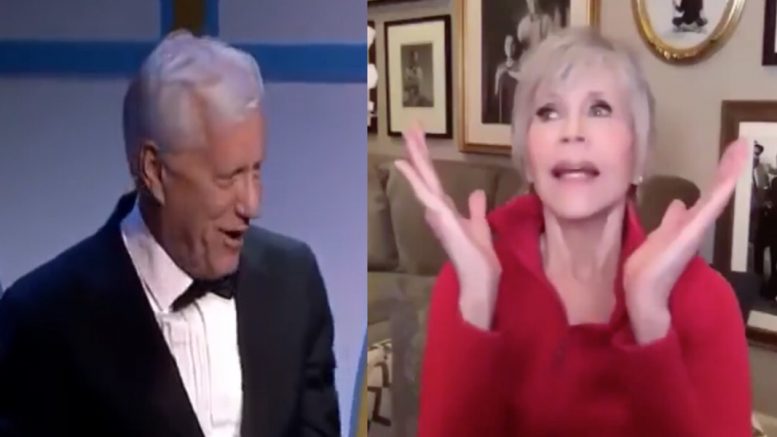 Far-left actress Jane Fonda was seen a video that surfaced on Twitter Wednesday, saying that the novel coronavirus is “God’s gift to the left”, claiming the pandemic “ripped the Band-Aid off who [President Trump] is and what he stands for”.

Fonda said the November election is a “crossroads” for the country, saying “We can stop fascism”, adding, “We are people who can help determine which way humanity goes.”

“What a great gift, what a tremendous opportunity, we’re just so lucky, we just have to use it with every ounce of intelligence and courage and wherewithal we have,” Fonda said. “… This is it.”

“I just think COVID is God’s gift to the left,” Fonda continued, as she chuckled. “That’s a terrible thing to say. I mean, I think it was a very difficult thing to send down to us, but it has ripped the Band-Aid off who [President Trump] is and what he stands for and what is being done to average people and working people in this country.”

She continued, “We can see it now, people who couldn’t see it before, you know, they see it now and we have a chance to harness that anger and make a difference.

“I feel so blessed to be alive right now,” Fonda added. Video Below

Jane Fonda: a disease that has killed 200,000 Americans is “God’s gift to the Left.” pic.twitter.com/hp0TYv9mgK

Woods responded again by tweeting another video of Fonda when she said, “COVID is God’s gift to the left”, and wrote, “Meet Satan”.

The smug chuckle after she says “I just think COVID is God’s gift to the Left.” pic.twitter.com/0NvAAJjKnL

Many veterans of the Vietnam War still refer to the actress as “Hanoi Jane,” recalling Fonda’s disastrous trip to North Vietnam in 1972 when she was photographed on an anti-aircraft gun used to shoot down American pilots. Fonda has long since apologized for the incident, Fox News reported.

(Related: Jane Fonda Urges Dems To ‘Rise Up & Not Allow’ Republicans To Replace Ginsburg Before The Election)