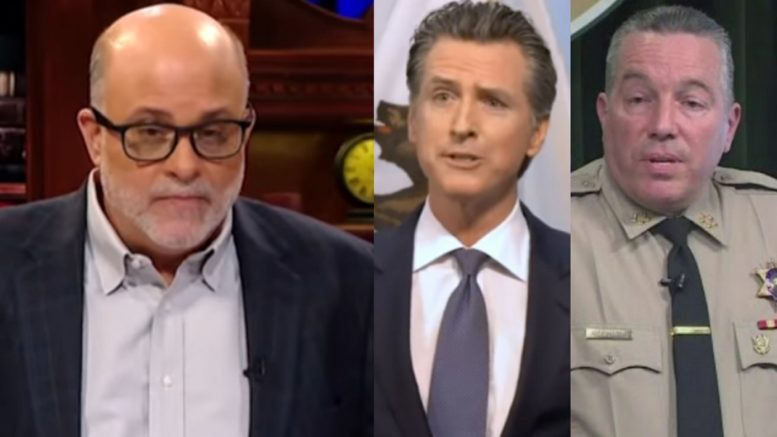 On Saturday, Constitutional lawyer Mark Levin reacted to news of the NRA filing a lawsuit against California officials for closing gun stores in wake of the coronavirus pandemic.

According to Bloomberg, “The National Rifle Association accused California’s governor and the sheriff of Los Angeles County in a lawsuit of taking away constitutional rights to firearms by shutting gun stores during the coronavirus outbreak.”

The lawsuit came after Governor Gavin Newsom “gave county sheriffs discretion to decide whether gun stores qualify as essential businesses while residents remain under a statewide stay-at-home order.” As a result, Los Angeles County Sheriff Alex Villanueva “first ordered the stores shut Tuesday, then allowed them to stay open and then reversed his decision on Thursday and ordered them closed.”

“The circumstances posed by the novel coronavirus (Covid-19) outbreak are noteworthy, but do not excuse unlawful government infringements upon freedom,” the NRA said in it’s complaint filed in court.

In a thread posted on Twitter, Levin wrote, “NRA sues California for shutting gun stores.
You know folks, it’s getting very scary out there. I mean beyond this terrible virus.”

“Emergencies require extraordinary steps but there are some very worrisome precedents being set that are not getting enough attention or discussion,” Levin said. “And I ought not be the only national figure, or perhaps among the very few, raising concerns.”

“I don’t seek to sabotage legitimate and balanced governmental action at the various levels of government, but I do urge more prudence,” he concluded. Video Below

Here is video of a local news company in Los Angeles discussing Sheriff Villanueva’s decision to close down gun stores:

Rep. Zeldin To Speaker Pelosi: “This Is The Worst Time To Bury Your Head In The $23,000 Freezer”