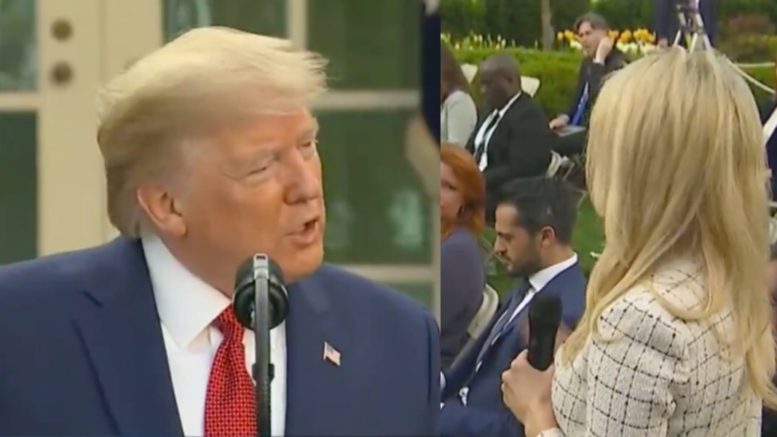 As reported by Us4Trump, President Trump took to Twitter Sunday citing an article written by Michael M. Grynbaum in The New York Times, in which the headline read: “Trump’s Briefings Are a Ratings Hit. Should Networks Cover Them Live?”

“Mr. President, your approval ratings have been the highest they’ve ever been, as well as the ratings on your handling of the virus. Yet, there are some networks that are saying they are debating whether or not to carry these briefings live. Do you think there is a link between the two?” Jenn Pellegrino asked the president.

“Well, I don’t know. I know that– boy, that’s a nice question,” the president expressed. “Thank you, very much. Yeah, I don’t want high approval ratings for this. I wish we could have our old life back. We had the greatest economy that we’ve ever had.”

“We didn’t have death, we did haven’t this horrible scourge, this plague. Call it whatever you want, the virus. But, we’re working very hard. That’s all I know,” he continued. “You know, I see things, I see numbers– they don’t matter to me. What matters to me is that we have a victory over this thing as soon as possible. When you hear that 2.2 million people could have died if we did not go through all of this, and now, the number will be a much lower number– hopefully it’s gonna be the numbers we’re talking about.”

Citing The New York Times article, the president wrote on Twitter Sunday, “President Trump is a ratings hit. Since reviving the daily White House briefing Mr. Trump and his coronavirus updates have attracted an average audience of 8.5 million on cable news, roughly the viewership of the season finale of ‘The Bachelor.’ Numbers are continuing to rise.”

“On Monday, Fox News alone attracted 6.2 million viewers for the president’s briefing — an astounding number for a 6 p.m. cable broadcast, more akin to the viewership for a popular prime-time sitcom,” the NY Times wrote.