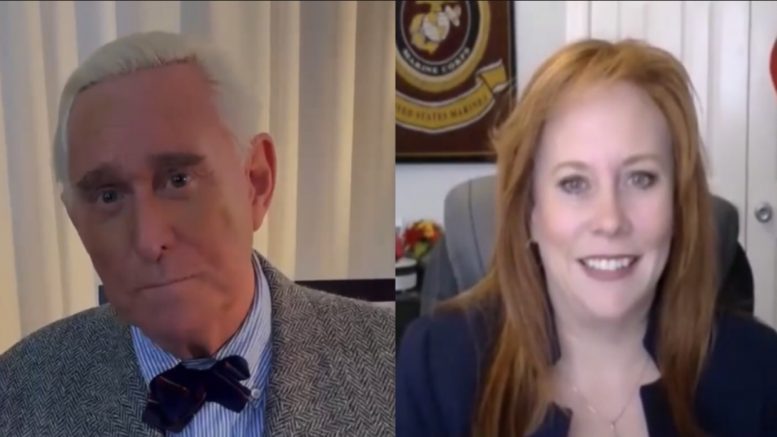 Smith is a 2022 U.S. Congressional Republican candidate in North Carolina’s new 2nd District, who, according to her campaign website, is “the unapologetic America first, pro-life, pro-guns, pro-military, freedom loving, and pro-Trump fighter”.

“That’s because Sandy Smith is the only candidate who’s pushing for full forensic audit of the 2020 election. She’s pro-Trump, she’s pro-life, she’s pro-Second Amendment, and she will push for an immigration moratorium to protect North Carolina jobs,” Stone explained.

“Please join me in supporting Sand Smith Congress,” he urged in the video message.

Smith responded to Roger Stone’s endorsement, by expressing her gratitude on Twitter. “Thank you so much to political juggernaut and patriot, Roger Stone! Truly honored!” the North Carolina Republican congressional candidate wrote. Continued Below

Thank you so much to political juggernaut and patriot, Roger Stone! Truly honored! pic.twitter.com/ixYSIWY7qt

who has pushed for a forensic audit of the 2020 election, is pro-Trump, pro-life, and supports an immigration moratorium to protect North Carolina jobs. Sandy Smith is an America First fighter & won't back down to the swamp. Please join me in supporting Sandy Smith. (2/2)

Sandy Smith has also received endorsements from the following:

Sandy Smith has called for a comprehensive forensic audit of the 2020 election in North Carolina. She outlined the reasons why in an article written last July for the publication Big League Politics, titled: North Carolina Needs an Audit and Here’s Why.

An Election Integrity Caucus consisting of lawmakers from all 50 states was officially formed this summer. Arizona State Senator Wendy Rogers, who is one of the caucus founders, made the special announcement while attending Mike Lindell’s Cyber Symposium with other members of the newly formed caucus, as previously reported by The Freedom Times.