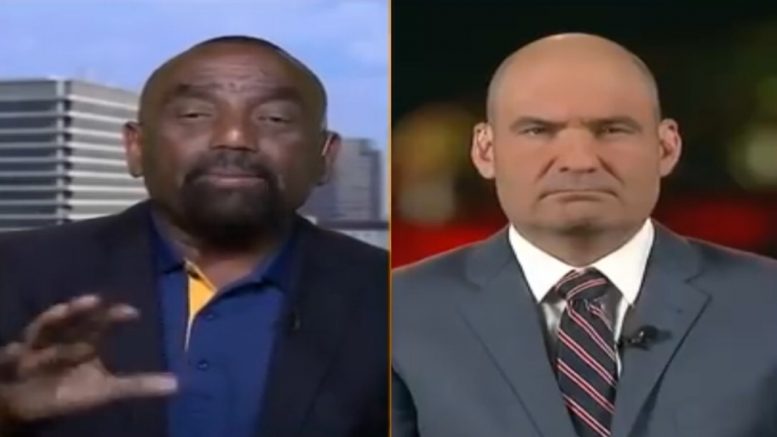 During a heated conversation over the weekend on CGTN America’s “The Heat” , Chris Hahn melted down as Jesse Lee Peterson repeatedly called him a “beta male” for interrupting, while Peterson was trying to talk.

Weighing in on President Trump’s response to the coronavirus pandemic, Jesse Lee Peterson said that the Commander in Chief “took action early on when he banned travel from China and parts of Europe.”

“These same far-left, radical, lying Democrats call him a racist,” Peterson said. “Even Nancy Pelosi went down to China Town, prancing around with the Chinese people. … And then, as soon as [Trump] decided to do something else, they went against him. Everything that this president does, they are against him, because they are liars. And what they want is power and wealth. That’s what they want, and the president is in their way of getting control of the people and getting financed for themselves.”

Peterson went on to say that he “likes the idea” of the election being delayed, referring to President Trump questioning whether we should “delay the election until people can properly, securely and safely vote”, amid the novel coronavirus pandemic.

“Democrats are desperate,” he said, while Chris Hahn started to interrupt. “They want power and wealth. They’re far left radical. They are so far left they are falling off the edge, and they want to control their people. And the Democrats cannot be trusted at all.” Continued Below

According to Urban Dictionary, a beta male is someone who lacks the masculinity of an alpha male. They are unconfrontational and are unable to assert male dominance. The Modern Man describes beta male as being one who has mild levels of insecurity, nervousness, and fear in social situations. Follows the lead of the alpha male because he is either too afraid or lacks the confidence and belief in himself to be the leading male.

“Why are you always interrupting, man?” Peterson asked Hahn. “Don’t interrupt me. I didn’t interrupt you,” provoking Hahn to blurt out: “[Be]cause you’re a lying fool! And I don’t want these people to hear you.” Video Below

Peterson shot back at Hahn again, saying: “I don’t need you to interrupt me, Mr. beta male,” which Hahn then asked, “Oh, you think I’m a beta male? Come on out here. We’ll see who is a beta male.”

He then continued his previous thought by adding: “[Democrats] have tried before to steal the election, and that’s what they want to do this time around. They want the president out. The president has more support than what the liberal media and these liars want you to know.”

(Related: Rep. Matt Gaetz & Chris Hahn Get Into A Heated Exchange Over Mail-In Voting: “Give Me A Break!”)