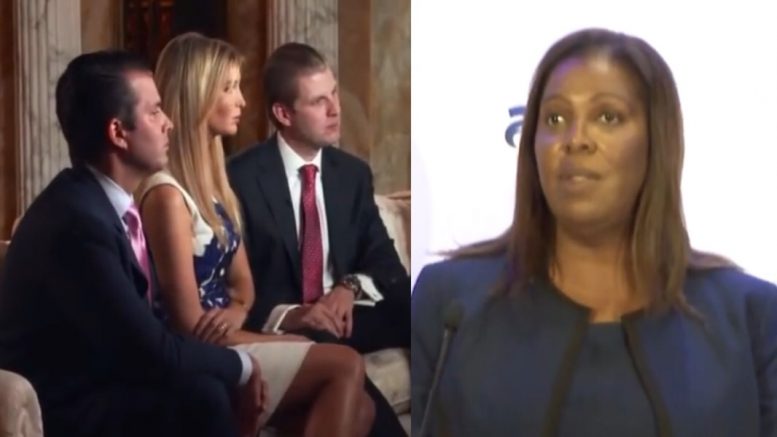 The court filing said state authorities haven’t yet decided whether to bring a lawsuit in connection with the allegations, but that investigators need to question Trump and his two eldest children as part of the probe, Time reported.

The Trump Organization issued a statement on Wednesday calling the civil investigation “baseless” and politically motivated.

The only one misleading the public is Letitia James. She defrauded New Yorkers by basing her entire candidacy on a promise to get Trump at all costs without having seen a shred of evidence and in violation of every conceivable ethical rule. Three years later she is now faced with the stark reality that she has no case.

So, in response to Trump suing her and filing multiple ethical complaints, and on the heels of her failed governor’s race, she has no choice but to mislead the public yet again by misrepresenting the facts and ignoring her own inflammatory comments. Her allegations are baseless and will be vigorously defended.

Trump’s legal team has sought to block the subpoenas, calling them “an unprecedented and unconstitutional maneuver.” They say James is improperly attempting to obtain testimony that could be used in the parallel criminal investigation, being overseen by Manhattan District Attorney Alvin Bragg, as reported by Time. Continued Below

The 45th President sued James in federal court last month, seeking to put an end to her investigation. In the suit, his lawyers claimed the Democrat New York attorney general had violated the Republican’s constitutional rights in a “thinly-veiled effort to publicly malign Trump and his associates.”

Trump later issued a statement blasting James, and referring then-Gov. Andrew Cuomo, who resigned in the face of a report commissioned by James that found he sexually harassed nearly a dozen women. Cuomo’s younger brother Chris recently was fired as a CNN host after disclosures he had more extensively offered advice to Gov. Cuomo’s staff on how to deal with the claims than was previously known, CNBC reported.

“Tell Letitia that she is not dealing with the Cuomo brothers, a corrupt Governor in a corrupt state, including your office and others, and Fredo, who did the Governor’s dirty work for him,” Trump said in an email statement last month. “Despite many years of investigation that nobody else could have survived even if they did things just slightly wrong, yours is just a continuation of the political Witch Hunt that has gone on against me by the Radical Left Democrats for years.” Continued Below

“This is not about delay, this is about our Constitution! You are nothing but a corrupt official doing the dirty work of your party. You should not be in office. This could well be the reason you were just rejected by the people of NY in your inept run for governor. You didn’t quit for a higher purpose, you quit because your poll numbers were atrocious—you didn’t have a chance. New York got lucky!” the 45th President said.

In a statement on Tuesday, James wrote on Twitter, “We are taking legal action to force Donald Trump, Donald Trump, Jr., and Ivanka Trump to comply with our investigation into the Trump Organization’s financial dealings. No one in this country can pick and choose if and how the law applies to them.”

“We have uncovered significant evidence indicating that the Trump Organization used fraudulent and misleading asset valuations on multiple properties to obtain economic benefits, including loans, insurance coverage, and tax deductions for years. Donald Trump, Donald Trump, Jr., and Ivanka Trump have all been closely involved in the transactions in question, so we won’t tolerate their attempts to evade testifying in this investigation,” she claimed.

“We will not be deterred in our efforts to continue this investigation, uncover the facts, and pursue justice, no matter how many roadblocks Mr. Trump and his family throw in our way. No one is above the law,” James said. Continued Below

Letitia you can not escape your own words. This is all window dressing for your abuse of office and ethical misconduct (which we are prosecuting you for) and northing more than a PR move to revive a political career after your gubernatorial disaster. @NewYorkStateAG https://t.co/7o5mlUp9PI pic.twitter.com/GXpIwThPDD

New Yorkers: When you see women pushed to their death in front of Subway cars, when children are shot in the middle of Times Square, know that the Cy Vance and Letitia James prioritized investigating Trump over fighting crime. They are responsible for the mess that is New York. pic.twitter.com/KckroVSJLJ

(Related: ‘The People Of Our Country Are Not Going To Take It Anymore!’: Trump Issues A Statement On Gen. Milley, Hillary Camp & More)

Acosta Vents His Frustration Over Trump Mocking CNN, McEnany Reacts: “He Was Making A Point That CNN Has Regularly Taken Him Out Of Context”