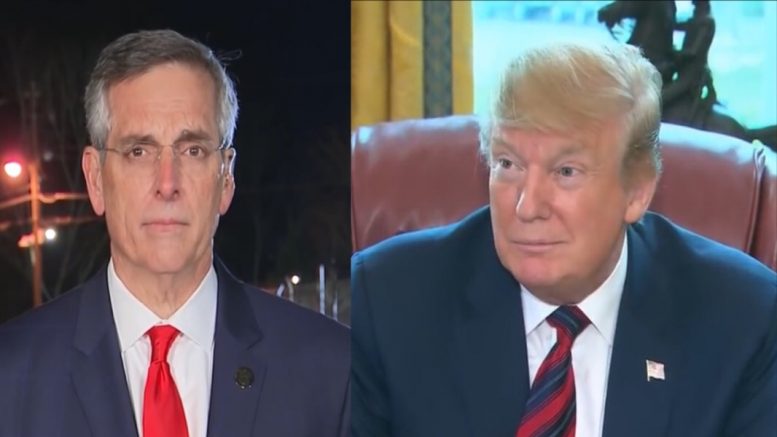 45th President Donald J. Trump sent a letter to Georgia Secretary of State Brad Raffensperger (R) on Friday regarding “large scale voter fraud” that “continues to be reported in Georgia” and requested that his office “start the process of decertifying the Election, or whatever the correct legal remedy is, and announce the true winner”.

“Large scale Voter Fraud continues to be reported in Georgia. Enclosed is a report of 43,000 Absentee Ballot Votes Counted in DeKalb County that violated the Chain of Custody rules, making them invalid,” former President Donald Trump wrote to Raffensperger.

“I would respectfully request that your department check this and, if true, along with many other claims of voter fraud and voter irregularities, start the process of decertifying the Election, or whatever the correct legal remedy is, and announce the true winner,” the 45 President urged.

“As stated to you previously, the number of false and/or irregular votes is far greater than needed to change the Georgia election result. People do not understand why you and Governor Brian Kemp adamantly refuse to acknowledge the now proven facts, and fight so hard that the election truth not be told,” he wrote.

“You and Governor Kemp are doing a tremendous disservice to the Great State of Georgia, and to our Nation — which is systematically being destroyed by an illegitimate president and his administration. The truth must be allowed to come out. Thank you for your attention to this matter,” President Trump concluded. Continued Below 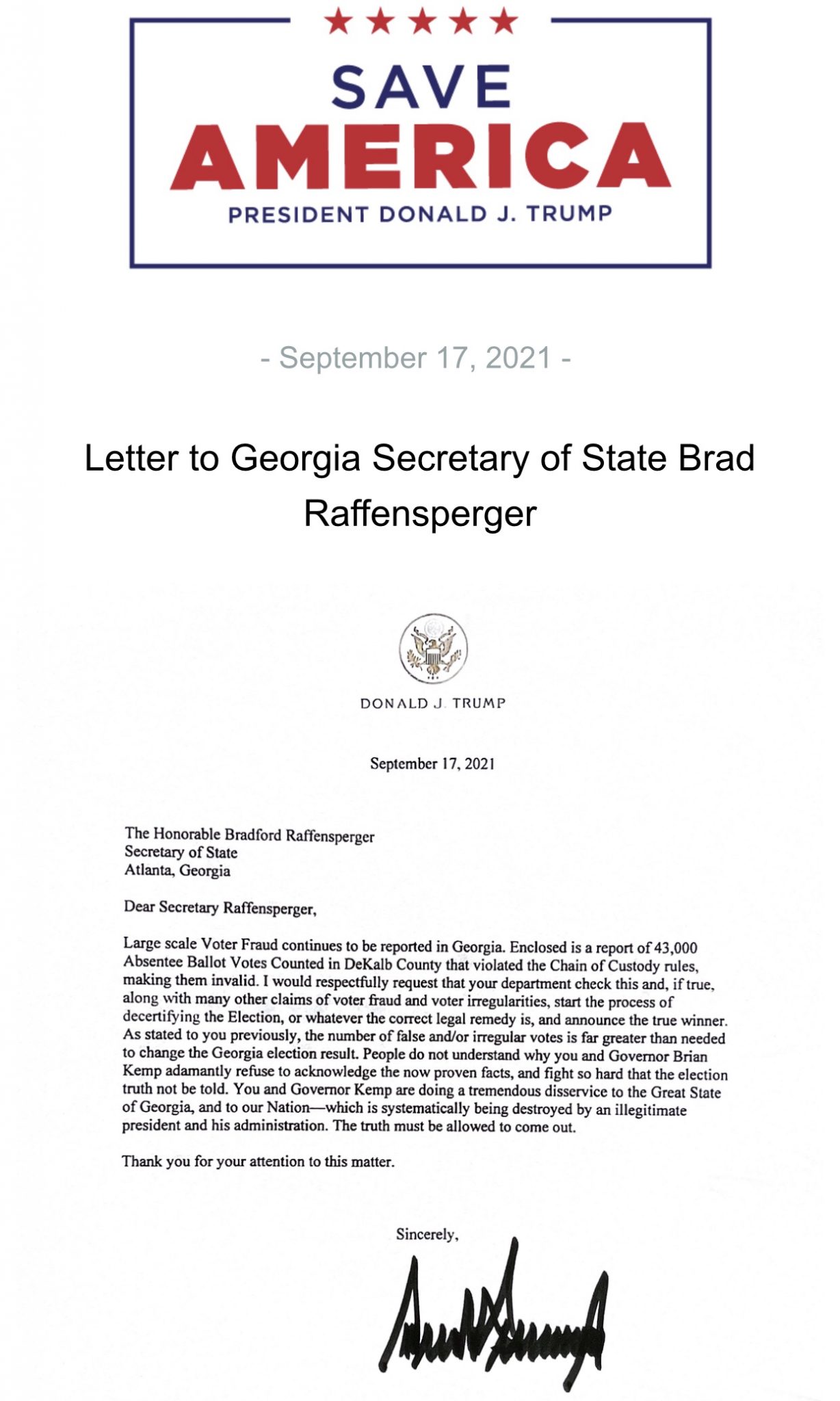 43,907 of the 61,731 absentee ballots deposited in drop boxes in the November 2020 presidential election in DeKalb County, Georgia–72 percent–were counted in official tallies certified by the county and the state, despite violating chain of custody requirements set forward in Georgia Emergency Rule 183-1-14-1.8-.14  promulgated by the Georgia State Election Board at its July 1, 2020, meeting, Georgia Star News reported.

In a statement last month, President Donald Trump said, “Georgia has been caught. What are Kemp and Raffensperger going to do about it? Or will they sweep it under the table like they have done everything else trying to claim they had an honest election with everybody laughing as they speak”. Continued Below

As reported by Georgia Star News:

That rule states absentee ballots placed in drop boxes, “shall be immediately transported to the county registrar” by the two person collection team, which is required to sign a ballot transfer form indicating the number of ballots picked up, the time the ballots were picked up, and the location of the drop box, and that, “The county registrar or a designee thereof shall sign the ballot transfer form upon receipt of the ballots from the collection team.”

The Georgia Star News obtained 725 absentee ballot drop box transfer forms used in the November 2020 election in DeKalb County to document the chain of custody of the 61,731 absentee ballots deposited in drop boxes from the DeKalb County law department in response to an open records request.

Of the 61,731 absentee ballots DeKalb County recorded as being deposited into drop boxes during the November 2020 election, 46 percent – or 28,194 of the absentee ballots – were not documented as being received by the elections registrar or the director’s designee until the day after they were collected from the drop box. Continued Below

The range in which absentee ballots were collected from drop boxes in DeKalb County and documented as received by the registrar the next day was between 13 and 22 hours, or nearly a full day later.

For another 26 percent, representing 15,713 absentee ballots collected from drop boxes during the November 2020 election, there was no receipt time recorded at all by the elections office, as is required by the July 2020 emergency election code rule.