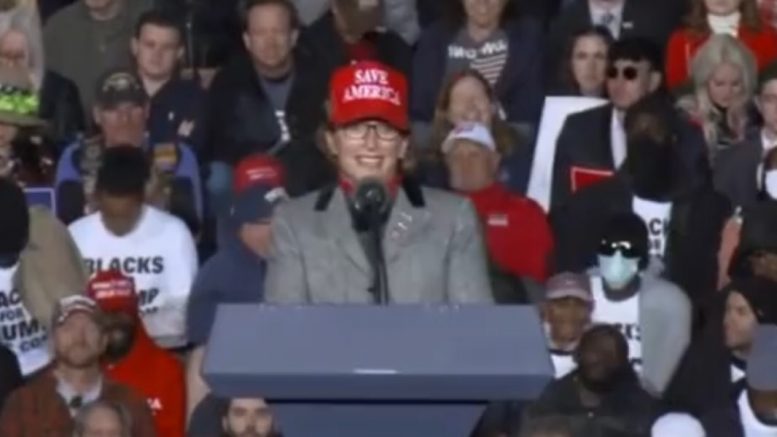 Election integrity champion Arizona State Senator Wendy Rogers (R) spoke at a “Save America” rally on Saturday in Florence, openly declaring she is a “yes vote to decertify” Arizona electors and asserted that 45th President Donald J. Trump “won” the 2020 election and is the “duly elected president”, despite what the “propagandist media keeps repeating”.

“We know the election was stolen, don’t we? We know they rigged the machines, the data bases, the voter rolls, the drop boxes, the county-level vote counting. … Let me tell you, Arizona is a red State. We are not turning purple. And President Trump won!” Senator Wendy Rogers said before the audience loudly cheered.

Senator Rogers highlighted that she has pre-filed election integrity measures such as getting rid of voting machines, making election day as a state holiday, and putting an end to local mail-in-voting.

“But bills, although good, don’t do enough to atone for the theft that happened in 2020. We need, we must decertify the presidential election of 2020!” she insisted, which prompted the crowd to chant “decertify!”

“I am a yes vote to decertify. Many of my colleagues in the Arizona Senate want to decertify. If you want everyone on board to decertify, call your Arizona legislator, and tell him or her to get on board. We also need to audit all 50 States. Then we need to do door-to-door canvas of all 50 States,” the Trump-endorsed Arizona lawmaker encouraged. “We must canvas and audit. If we do not, the voter rolls remain corrupt, rigged.”

Senator Rogers explained that the “canvas” is important because it would “check the voter rolls and the audit checks the vote”, adding, “And we need regular, random audits. Counties should expect a forensic audit every election. And there should be no notice and spot checked,” she suggested. Continued Below

The Arizona State senator also said that the “Communists stole the election” in 2020 from 45th President Donald Trump and declared, “He is the duly elected president!”

“And just because the propagandist media keeps repeating the same lie over and over again, does not make it true,” Senator Rogers said.

“We all saw the 3 AM dump of ballots and all the swing states. The graph of that vote dump defies reality where all the fake Biden votes suddenly jumped ahead of President Trump,” she added. Video Below

During his remarks, 45th President Donald Trump gave a shoutout to Senator Wendy Rogers at the “Save America” rally.