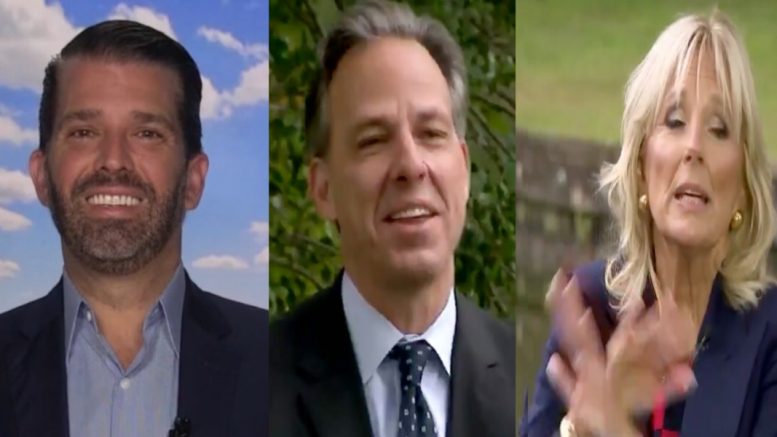 Jill Biden spoke with Jake Tapper in an interview that aired during CNN’s “State of the Union” Sunday and dodged a potential question regarding her husband’s gaffes, declaring “you cannot even go there,” Swamp Drain reported.

Donald Trump Jr. reacted Monday on “Fox & Friends”, calling Jill Biden’s statement “absolutely asinine”, adding, “The media will carry their water for [Joe Biden] and let him get away it, just like Jake Tapper did.”

“Your husband has been known to make the occasional gaffe,” Tapper said, referring to Democratic presidential nominee Joe Biden.

“The gaffe issue is over because…”, Tapper responded, to which Jill Biden said, “Over. So over.” Continued Below

“Joe Biden can’t remember where he is 50% of the time. He forgets the office that he’s running for. He’s not willing to campaign and speak to the American people, presumably because they’re ballot harvesting, as we saw from James O’Keefe last night. And because, the media will carry their water for him and let him get away with it, just like Jake Tapper did,” Trump Jr. said.

“If Donald Trump made one Joe Biden type error once, it would be all over. Joe does it everyday, so that’s why he’s in debate prepping. He can’t be on the campaign trail because he needs to be able to preform for 2 hours, despite having done this for 50 years. It’s absolutely asinine that she could get away with saying something like that when her husband is literally– most inept, in terms of speaking, in terms of ability,” he continued. Video Below

“But Jill Biden is campaigning because Joe doesn’t seem capable of it. But unfortunately, she’s not the one running for president, despite them putting her out there much more than him,” he added.

He also tweeted on Monday:

No one in the history of campaigns will have done more time on debate prep and Joe Biden. He better have the greatest performance in the history of debate with as little time as he’s been on the road and obviously preparing. https://t.co/vPFDDcIzKR

(Related: Biden Says He Would Shut Down The Economy A 2nd Time If Scientists Told Him To, Don Jr. Reacts: “He Would Ruin The Lives Of Millions Of Families”)