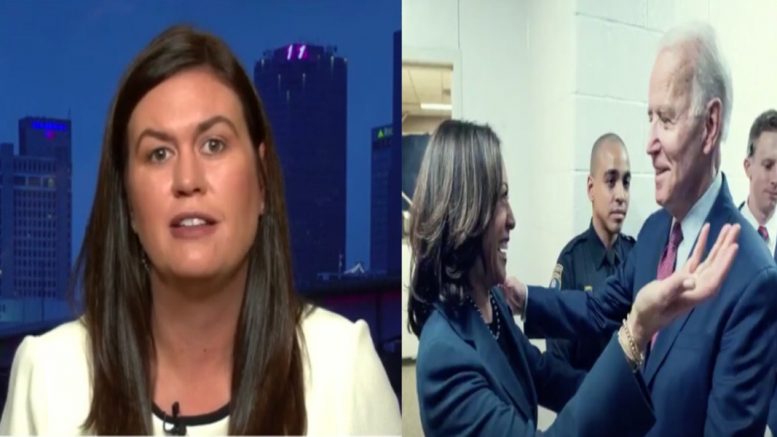 During a Wednesday interview on “Fox & Friends”, former White House press secretary Sarah Huckabee Sanders said a Biden-Harris administration “would be a disaster for our country.”

Sanders made the comments one day after Harris, the politically shrewd California senator with a law enforcement background that has caused some tensions with the progressive left, was announced Tuesday as Biden’s running mate, Fox News reported.

“I think that Kamala Harris is no surprise that she is Joe Biden’s pick,” Sarah Sanders said. “She is a champion of the same far-left agenda that Joe Biden has been touting over the last year.”

Sanders pointed out that “they both support higher taxes, a total government takeover of health care, liberal judges, open borders and the list goes on.”

“This ticket will further crush our economy at a time when we need to be rebuilding it,” the former White House press secretary continued. “It’s the last thing, I think, we need is these two taking over.”

She also said that she thinks “a Biden-Harris ticket would make a Hillary Clinton presidency look like a moderate presidency.” Continued Below

“…Kamala Harris and Joe Biden have both completely caved and adopted the far-left agenda of their party. They have totally been controlled by both supporting the Green New Deal and a number of other policies that would be absolutely crushing to our economy and it’s not just about the economy, our entire freedom and way of life in our country is at stake,” she continued.

“It’s never been more important for people to come out and to vote and to really look at the difference of the two candidates’ policies and I can’t imagine that anybody in this country, when they really look at it, wants to live under a Biden-Harris presidency,” Sanders stated. “I think that what they would do, not just again to the economy, but our entire way of life would be devastating to our country, and another reason people need to get out to make sure Donald Trump gets reelected.” Video Below

Rep. Collins Rails Against Pelosi’s Decision To Keep Congress In Recess Until May 4: “Nancy Pelosi’s Emergency Is Only Nancy Pelosi”