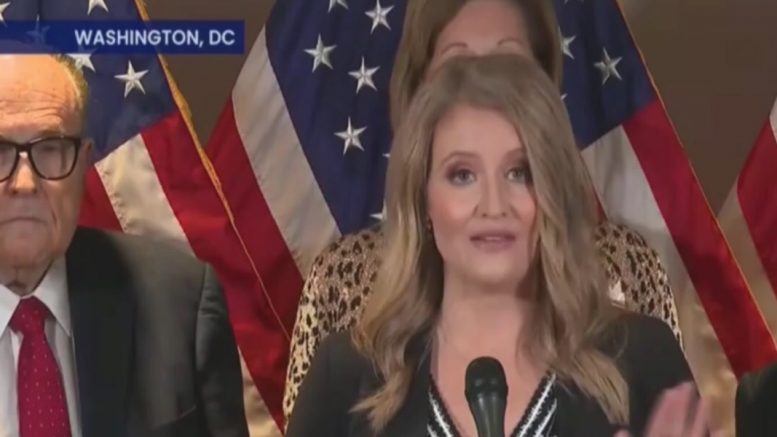 Jenna Ellis, Trump campaign senior legal adviser, during an explosive news conference in Washington, D.C. Thursday, schooled the media, accusing reporters of failing to serve as “unbiased jurors” in the court of public opinion while reminding them that their personal views are unimportant.

“What you have heard, I’m sure, in the fake newspapers tomorrow will be one of two things. Either there was not sufficient evidence that we presented, or we spoke too long,” Jenna Ellis said. “What you’ve heard now is basically an opening statement. This is what you can expect to see when we get to court to actually have a full trial on the merits, to actually show this evidence in court and prove our case. This is not a ‘Law & Order’ episode where everything is neatly wrapped up in 60 minutes.”

Ellis then pointed out to the reporters who have “tuned out” widespread claims of voter fraud “clearly” never were court reporters because “trials take time” and “evidence takes time”.

“This is basically an opening statement so the American people can understand what the networks have been hiding and what they refuse to cover, because all of our fake news headlines are dancing around the merits of this case and are trying to delegitimize what we are doing here,” Ellis said. “Let me be very clear that our objective is to make sure to preserve and protect election integrity.”

“President Trump has been saying from day one, that this is about maintaining free and fair elections in this country. It is not about overturning an outcome, it is about making sure election integrity is preserved, and every American should want that. If every American is not on board with that, you have to ask yourself why,” she recommended. Continued Below

“If your fake news network is not covering this or allowing you to cover it fairly and accurately, you should ask yourself why. This is absolutely a legitimate, legal basis,” Ellis said, noting that she would be able to dismiss most reporters as jurors from a hypothetical court of “public opinion” because of biased coverage.

“We have been asked to provide an entire case that would generally take years in civil litigation. … This is the court of public opinion we’re in right now. We are not trying our case in the court of public opinion because if we were, we would get unbiased jurors. I would strike 99% of you from the jury and I would be allowed to because of the fake news coverage you provide,” she explained.

“You are not unbiased jurors, and until you step out of your role as a journalist and actually go into a courtroom and you are a judge on a bench that has sworn an oath to be unbiased in our separation of powers, then your opinion does not matter,” Ellis said. “The facts matter, the truth matters and if you are fair reporters, you will cover that fairly and appropriately and you will allow coverage of our media team and our legal team.” Continued Below

“That is absolutely shocking that all you cover is around the margins”, Ellis said and speculated over how the press would frame Thursday’s news conference.

“I’ve seen all of you taking pictures right now and I can anticipate what your headlines are going to be. If you are not willing to talk about the evidence that has been presented, then that is absolutely unacceptable for journalistic standards,” Ellis said. “This is an opening statement. This is something where we have told you what the evidence will show, and we have given you a brief description. That happens in a court room all the time where that is not the fact-finding process, that is just an overview. That is what we have given you today, because the American people deserve to know what we have uncovered in the last couple of weeks.”

Ellis then urged reporters to cover claims made by the Trump campaign accurately for the sake of democracy in America. “You, the press, should cover this fairly and should know that this matters to election integrity and it matters to the future of our nation,” she added. Video Below

Proud to be your lawyer, Mr. President!!! We are fighting for this great country with you!!! 🇺🇸 https://t.co/k6nrLYj1iV

(Related: Sidney Powell Steps To The Podium & Declares: “Trump Won By A Landslide & We Are Going To Prove It”