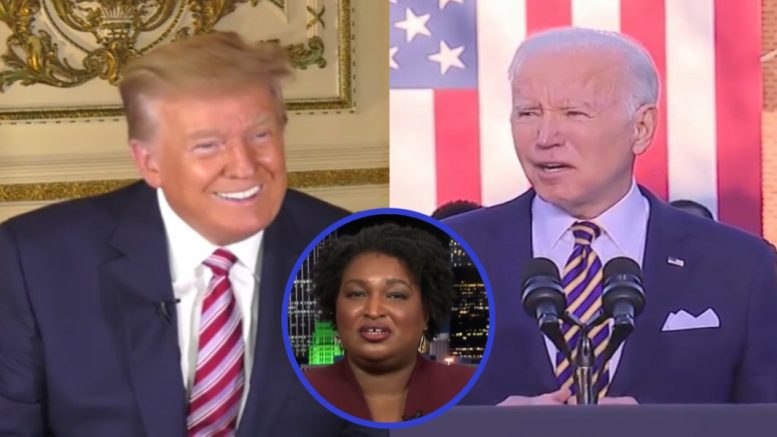 “Stacey Abrams helped Biden steal the 2020 Election in Georgia but now she won’t even share a stage with Joe,” 45th President Trump said in his email statement from his “Save America” PAC.

“Stacey knows that Biden actually lost BIG in Georgia, and in the 2020 Presidential Election as a whole, and he’s been so terrible she now wants nothing to do with him,” he suspected.

“Even the woke, radical left realizes that Joe Biden’s Administration is an embarrassment!” Trump declared.

Abrams lost Georgia’s 2018 gubernatorial election to Republican Brian Kemp; refused to concede and claimed she was cheated. She is running for governor again this year. Continued Below

Abrams refused to concede after losing the 2018 gubernatorial election by 1.4 percentage points. She blamed her loss on Kemp’s purge of 1.4 million registered voters in his role as Georgia’s secretary of state and national Democrats rallied to her cause.

“Concession means to acknowledge an action is right, true or proper. As a woman of conscience and faith, I cannot concede,” Abrams said in 2018. “I will not concede because the erosion of our democracy is not right.”

Last month, Trump announced his “complete and total endorsement” for former Georgia Republican Senator David Perdue, who is running for Governor of Georgia and said, in part, that Perdue, “is the only candidate in Georgia who can beat Stacey ‘The Hoax’ Abrams in November”. Continued Below

she now wants nothing to do with him. Even the woke, radical left realizes that Joe Biden’s Administration is an embarrassment!”

Biden Suggests he’s a ‘Poor’ Relative to African Leaders: ‘The Poor Come & They Eat Your Food Stay Longer Than They Should’