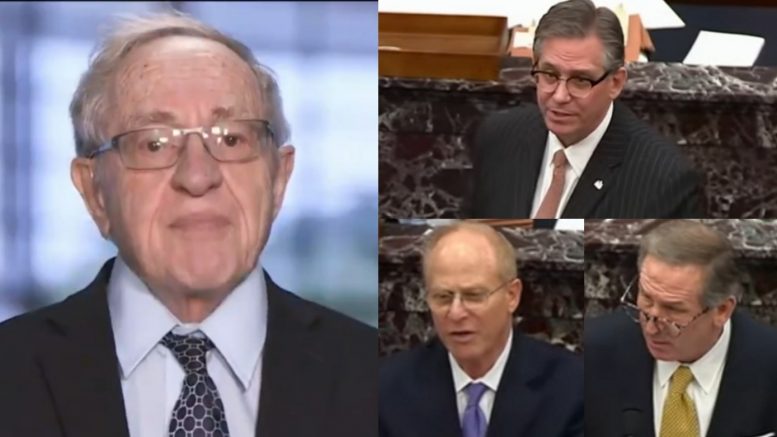 Harvard law professor Alan Dershowitz was highly impressed with the performance from Donald Trump’s lawyers on Friday at the Senate impeachment trial, as they delivered an explosive defense after two long days of allegations and arguments made by House impeachment managers.

Dershowitz — who was highly critical of Trump’s defense on the first day of the trial — thinks the trio of attorneys “redeemed themselves” on Friday, and he is now convinced “they have won.”

“First of all, I think all the lawyers for former President Trump redeemed themselves,” Dershowitz declared during an interview on Newsmax. “All three of them presented very, very effective rebuttals to the managers’ case.”

“I think they should now sit down quickly and get a vote. I think they have won,” he added.
“The hardest thing to teach lawyers is to sit down and shut up after they’ve won. And I hope that they will do that. There’s no reason to go on.”

In his opinion, Mr. Dershowitz thinks that House impeachment lawyers “overplayed their hands” when they decided to go on presenting their case for an entire second day after having a successful first day.

If there’s anything that the defense needs to address during the remainder of the trial, according to Mr. Dershowitz, it should be on the notion that the Senate has “no juristiction to try a former president because a lot of Senators believe in that and they will want to vote for an acquittal on that ground.”

“On balance, the goal of thr defense was not to lose any of the Republican senators, and I think they’ve accomplished that,” he concluded. Video Below

'They've won.'@AlanDersh says, "All the lawyers for former President Trump redeemed themselves, all three of them presented very very effective rebuttals." https://t.co/VlT7z8drtO pic.twitter.com/szYhL4Kaqv