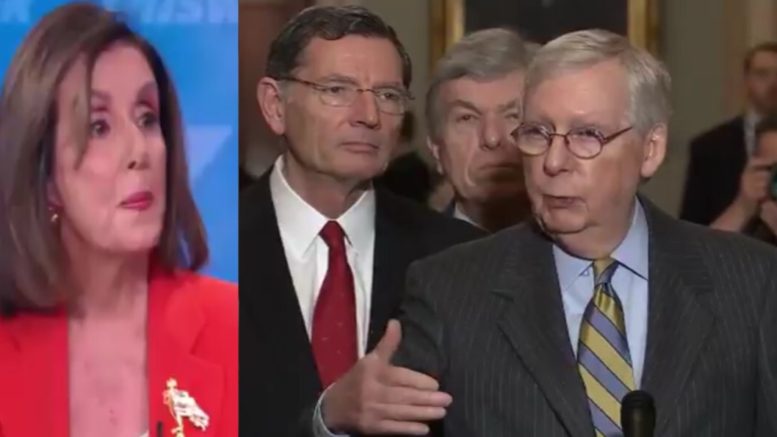 The House will vote Wednesday to name impeachment managers and transmit articles of impeachment to the Senate for the trial on charges of abuse of power and obstruction of Congress, Speaker Nancy Pelosi announced Tuesday, reported CBS News.

“Our understanding is the House is likely to send the Articles over to us tomorrow… If that happens we’ll go through some steps here this week,” Senator Mitch McConnell told reporters Tuesday on Capitol Hill. “Which would set us up to begin the actual trial next Tuesday. That’s the week ahead. I think that’s likely to hold up.”

He also said the Senate will deal with the question of witnesses once the trial gets underway, and noted the president and his legal team would also want to call witnesses of their own.

“We will be dealing with the witness issue at the appropriate time into the trial,” Senator McConnell stated. “And I think it’s certainly appropriate to point out that both sides would want to call witnesses that they wanted to hear from.”

In November, House Republicans put together a witness list of people they wanted to come forward to testify. House Intel Chairman Adam Schiff (D-CA) did not approve the GOP’s list. President Trump had also recommended five additional individuals to be added to that list, which included Schiff, Speaker Nancy Pelosi, Joe Biden, the Inspector General, and the whistleblower. (Continued Below)

In a statement, Pelosi said Senate Republicans would be engaging in a “cover-up” if members vote to dismiss the articles without hearing from witnesses.

“The American people will fully understand the Senate’s move to begin the trial without witnesses and documents as a pure political cover-up,” Pelosi claimed. “Leader McConnell and the President are afraid of more facts coming to light.”

Senator Mitch McConnell fired back at Pelosi and Democrats’ “cover-up” smear, saying: “The latest Democratic talking point is that if the Senate conducts a trial based on what the House itself looked at, we’ll be engaged in a cover-up. … Unless the Senate steps outside our lane and takes it upon ourselves to supplement the House case, it’s a cover-up? Do they think the entire country has forgotten what they were saying just a couple of days ago?” (Video Below)

“… We heard over and over that the House case was totally damning and convincing,” the Senate Majority Leader said. “… Clearly the majority of the House thought it was sufficient to impeach. And a number of Senate Democrats were happy to pre-judge the case publicly and suggest the House had proven enough for removal. But now, all of a sudden, the story has reversed. Now we hardly know anything. Now the investigation is just beginning.”

“Now what the House has produced, they’re calling their own investigation a cover-up. Who would be the author of this cover-up, Chairman Schiff?” he asked.

In a tweet on Tuesday, the Senate majority leader wrote: “In December, House Democrats pulled the plug on their investigation and impeached because they said it was urgent & they had already proven their case. But now they’ve delayed for weeks to insist that the Senate re-open their inquiry. So – neither urgent nor persuasive?” (Video Below)

[email protected] on impeachment timeline: "preliminary steps here this week which could well include the Chief Justice coming over and swearing in members of the Senate and some other kind of housekeeping measures…which would set us up to begin the actual trial next Tuesday." pic.twitter.com/KBJHUHncpL

Sen. Majority Leader Mitch McConnell (R-KY) on impeachment trial: "We will be dealing with the witness issue at the appropriate time into the trial. And I think it's certainly appropriate to point out that both sides would want to call witnesses that they wanted to hear from." pic.twitter.com/hAMzGhLlsm

First, Democrats spent weeks saying the House case was totally convincing. Now, the opposite: They say the House case is so thin that if the Senate judges what the House actually voted on, it's a “cover-up."

Their own investigation was so shallow that it now equals a “cover-up”? pic.twitter.com/08ZrAIqqFb

(Related: McConnell: Dems “Are Afraid Of Having The Senate Judge The Case They Are Actually Going To Send Us”)