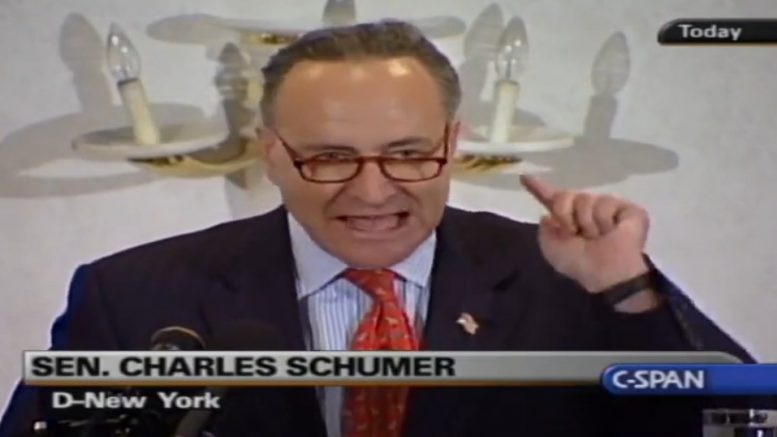 A video is recirculating on social media that captures a moment in 2005 when Senate Majority Leader Chuck Schumer suggested the elimination of the filibuster would be a “Doomsday for Democracy.”

According to Fox News, “Schumer 16 years ago fought in favor of the long-standing Senate procedural rule, which has come under scrutiny a number of times throughout the past 20 years, that allows lawmakers to block legislation through unlimited debate unless 60 members move to a vote.”

Related Article: Sen. Joe Manchin On Eliminating The Filibuster: “I Am Not Going To Be Part Of Blowing Up This Senate”

“The ideologues in the Senate want to turn what the Founding Fathers called “the cooling saucer of Democracy” into the rubber stamp of dictatorship. We will not let them,” Sen. Schumer is heard saying in a clip from 2005.

“The want because they can’t get their way on every judge to change the rules midstream, to wash away 200 years of history,” he continued. “They want to make this country into a banana republic where if you don’t get your way, you change the rules. Are we gonna let them?! It will be a Doomsday for Democracy if we do.”

In 2005, Democrat Chuck Schumer said eliminating the filibuster would “be a doomsday for Democracy.” pic.twitter.com/SInO8p9bSd

Ironically? Sen. Schumer along with other prominent Democrats and celebrities, including Bill Clinton, Barack Obama and Oprah Winfrey, have recently been pressuring Senator Joe Manchin (D-WV) to vote in favor of removing the 60-vote Senate rule to pass major voting rights reforms with a simple majority, a move that Manchin is strongly opposed to supporting.

“The pressure is ramping up as Schumer set a Jan. 17 deadline to vote on changing the Senate filibuster rules to advance voting reforms – a top priority for the Democratic agenda. Schumer wants an exception made for election legislation, arguing there’s an urgent need for national standards to combat “voter suppression” laws passed in GOP-led states after the 2020 presidential election.

So far, Manchin has shown no signs of budging and continues to stress the importance of protecting the Senate as an institution.”