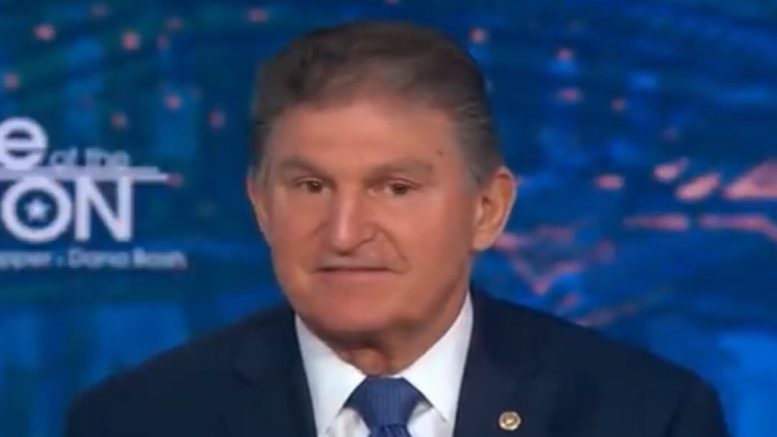 Sen. Joe Manchin (D-WV), during an interview Sunday on CNN’s “State of the Union”, railed against far-left Democrats who call him a “roadblock” to their progressive agenda, stressing that he is “not going to be part of blowing up this Senate.”

CNN anchor Dana Bash asked Senator Manchin how he would respond to Democrats who say that he is one of the “main roadblocks” to Joe Biden passing his “ambitious agenda,” prompting the West Virginia senator to say, “I’m not a roadblock at all.”

“I am not going to be part of blowing up this Senate of ours or basically this democracy of ours or the republic that we have,” Senator Manchin expressed, referring to the Democratic push to eliminate the filibuster. “If we have a 51-vote threshold in the Senate, the same as the House–the House wasn’t designed to be partisan.”

“The House was designed to be hot as a fire cracker. We were designed to cool it off, and that’s the Founding Fathers. It was a brilliant strategy they looked at, so why can’t we try to make this work?” the West Virginia wondered.

Senator Manchin said there will be “no consistency” in the Senate if there are “violent swings” every time there is a party change in Congress.

He also penned an op-ed in The Washington Post earlier this month, stating that he will “not vote to eliminate or weaken the filibuster.” Continued Below

“I do think they should be separated,” Senator Manchin said. “Because when you start putting so much into one bill, which we call an omnibus, it makes it very, very difficult for the public to understand. When you talk about infrastructure, they understand infrastructure.

“The human infrastructure is something that we’re very much concerned about, and when you think about all that we have done in the last year and plus the Covid bill this year, the American Rescue Plan, an awful lot has been done there, too,” he added. Video Below

Senator Manchin told Bash he does not support using a partisan budget process called reconciliation to pass a slimmed-down version of the proposal with only Democratic votes, saying, “We have to get back to getting it into the committees. Let the committee chair and the members of those committees work it.”

(Related: Trey Gowdy Slams Joe Biden For Abandoning His Call For Unity: “Practice What You Preach — Now That Would Really Be Unifying”)