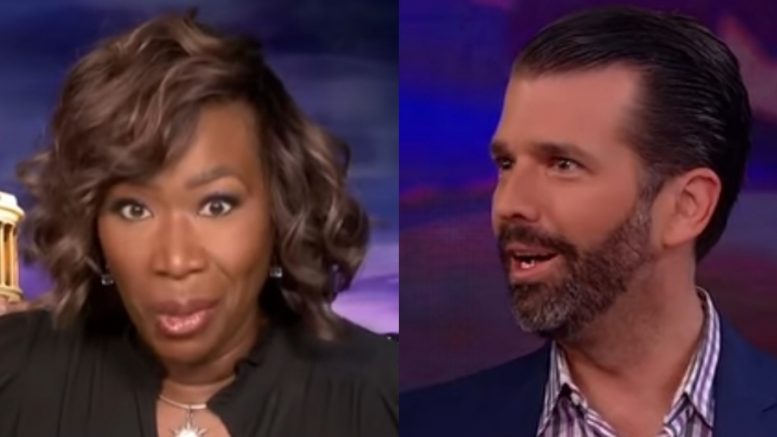 Donald Trump Jr. reacted to a news source claiming far-left political commentator Joy Reid might be in jeopardy of permanently losing her show on MSNBC when the network undergoes their next round of reshuffling.

John Nicosia, a former managing editor for Mediaite and the IJR, claims to have received information on the future of Reid’s show from a source at Comcast.

In a thread posted to Twitter, Nicosia stated as follows:

Source @ Comcast: “Joy Reid will lose her 7p show in the next round of reshuffling at MSNBC.” – “She does not have a show come mid Spring” – The “decision has been made, the only thing left is messaging on the move, which will be ratings.”

As was the case with Chris Cuomo at CNN, Reid has allies at Comcast, however, she is now viewed as “unmanageable” by many. Also, similar to Cuomo, it appears those allies have found out she has been “less than truthful about past incidents” (more to come).

Also, like Cuomo at CNN. Watch for MSNBC/Comcast to defend her right until the announcement.

I had the scoop last year Chris Cuomo was going to get axed by CNN and then after he was suspended got the scoop he was not coming back. I got very few personal attacks from his fans. Joy Reid’s fans however. Lord.

Also as I tweeted in November. Executives have been contemplating a change for months. But not until recently has the decision been made.

Related Article: Sen. Scott To Sen. Durbin, Joy Reid & Other Dems: “What Happened To The Party Of Inclusion & Diversity When It Comes To Conservatives Who Happen To Be Black?”

“Noooooo. Please keep her on the air!!! This kind of racism cannot stand (that’s how this works, right?) and if it’s not that it’s misogyny,” Don Jr. tweeted along with the #JusticeForJoy hashtag. “Don’t let the patriarchy allow this to happen!”

Noooooo. Please keep her on the air!!! This kind of racism cannot stand (that’s how this works, right?) and if it’s not that it’s misogyny. Don’t let the patriarchy allow this to happen! #JusticeForJoy https://t.co/SQZ5RACECO