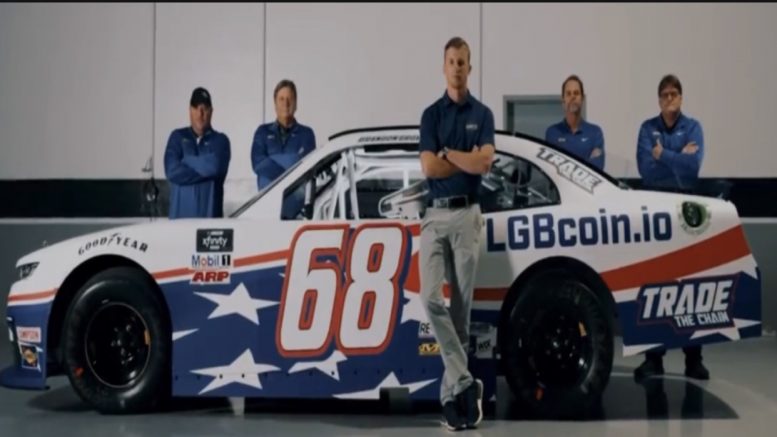 The cryptocurrency company has signed on as the team’s full season primary partner for the 2022 NASCAR Xfinity Series (NXS) season, according to a press release.

Brandon Brown released a video on Twitter Thursday of him walking into the garage to his No. 68 Chevrolet Camaro, showing off his new sponsor. LGBcoin is emblazoned on Brown’s car.

The company was coined LGB as a direct reference to the phrase, “Let’s Go, Brandon.”

I’m excited to welcome @LGBcoin_io aboard my No. 68 Chevrolet Camaro as our 2022 NASCAR Xfinity Series full season primary partner!

LGBcoin is a new, decentralized meme cryptocurrency similar to other meme coins and tokens such as Dogecoin and Shiba Inu, that has achieved a market capitalization of more than $300 million in less than six months. The patriotic coin dubbed “America’s Coin” aims to inspire positivity and unity, grounded in a strong belief of the American dream, the press release states.

“We are thrilled to partner with Brandonbilt Motorsports and Brandon Brown for the 2022 NASCAR Xfinity Series season,” said James Koutoulas, LGBcoin HODLer and founder of Typhoon Capital Management.

“Brandon is not only an incredibly talented driver, but also a thoughtful individual wise beyond his years. His commitment and singular focus on his profession is inspiring and his personal story is one that we can all be proud of—an American story of success and perseverance. Brandon is truly America’s Driver,” Koutoulas said. Continued Below

“We are proud to support Brandon this season, to help him continue his American dream,” said Koutoulas. “If we do our job right, when you think of us, and you hear, ‘Let’s Go Brandon,’ you’ll think and feel, ‘Let’s Go America.’”

In October, an NBC reporter made an attempt at damage control as “f**k Joe Biden!” chants erupted on live TV at a NASCAR event.

Biden: ‘That’s why I & so Damn Many Other People I Grew up With Have Cancer’