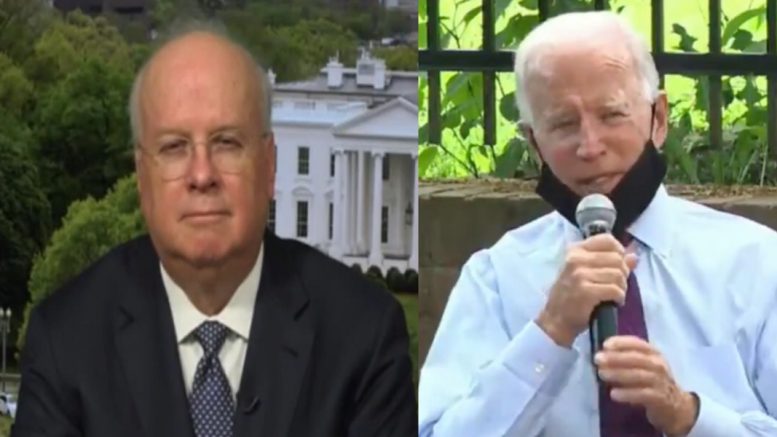 Rove also spoke with Fox News’ Neil Cavuto on Thursday, laying out Joe Biden’s claims he has made in relation to coronavirus from the start of the pandemic.

Rove said that Biden wrote, “This could be a pandemic and I’ve got four things that I suggest we need to do. Three of them involving passing legislation in 2021, after he took office next January– he would pass three bills. And then he would reauthorize a federal appropriation for hospitals treating pandemic patients, which was coming up in May to be renewed, which Congress renews routinely. He had no idea”.

Rove was referring to USA Today op-ed, in which Biden wrote, “As president, I will reassert U.S. leadership in global health security. My policies will always uphold science, not fiction or fearmongering. I will ask Congress to beef up the Public Health Emergency Fund and give me the power to use the Stafford Disaster Relief and Emergency Assistance Act to declare a disaster if an infectious disease threat merits it.”

“I will also renew funding — set to expire in May — for the nationwide network of hospitals that can isolate and treat people with infectious diseases, and fully fund the Global Health Security Agenda so the world is ready for the next outbreak,” Biden added. Continued Below

Karl Rove also pointed out that Biden’s advisors downplayed coronavirus from the beginning, noting that some had claimed, “This isn’t gonna be a pandemic, travel bans don’t work”.

“The day the first American dies of COVID in Kirkland, Washington, Zeke Emanuel was on a program, I think it was NPR, and says, ‘Don’t go out and buy a mask, [be]cause it won’t work. And they were dismissive it was gonna get serious. One of them said the likely of this being serious is very low. Emanuel says, ‘You know, as it warms up, it’s gonna move to the southern hemisphere just like the flu does. This is not gonna be that serious,'” Rove said of Biden’s advisors.

“Think about this, in January, February and March, several words never crossed the lips of the former vice president of the United States: masks, social distancing, … lockdowns– never crossed his mind. … On March 9th, [Biden] has a rally as late as that. As early as April, he’s talking about the utility of voting-in-person, as opposed to doing a mail-in-ballot,” he continued. Continued Below

“The idea that he is somehow on top of this is baloney, and he knows it, because he now you’ll notice in his address, he said, ‘Just like I’ve been saying since March’, and then he had a couple other quotes where he suggested there was even earlier that he had laid out a plan of action,” Rove said.

Rove noted that Biden had said in an interview with Joy Reid that he would’ve invoked the Defense Production Act and find a way to speed up a vaccine and also a way to administer it. President Trump has already done both.

Operation Warp Speed (OWS) aims to deliver 300 million doses of a safe, effective vaccine for COVID-19 by January 2021, as part of a broader strategy to accelerate the development, manufacturing, and distribution of COVID-19 vaccines, therapeutics, and diagnostics (collectively known as countermeasures).

On January 31, 2020, the Commander in Chief issued an Executive Order to “restrict and suspend the entry into the United States, as immigrants or nonimmigrants, of all aliens who were physically present within the People’s Republic of China, excluding the Special Administrative Regions of Hong Kong and Macau”. Video Below

Within hours of President Trump’s decision to restrict travel from China, top Democrats and media figures immediately derided the move as unnecessary and xenophobic.

Democratic presidential nominee Joe Biden quickly attacked what he called Trump’s “record of hysteria, xenophobia and fear-mongering” after the travel restrictions were announced.”

Joe Biden loves to claim that he recognized the threat of the coronvirus from the start. In fact, he and his top advisers misjudged it badly, writes @KarlRove https://t.co/01wYubyPq3

Karl Rove Fmr Bush 43 Deputy Chief Of Staff Details Biden’s Failed Covid History And Everything He Plans To Do Trump Already Did! pic.twitter.com/KNo5QkjW9T