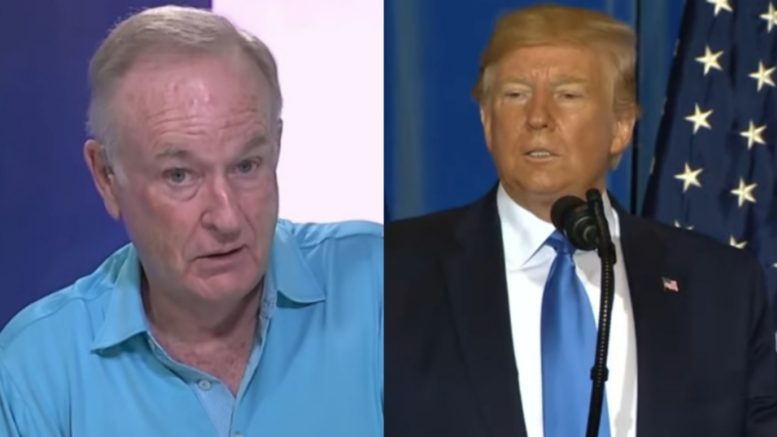 While joining Wayne Allyn Root of Newsmax, Bill O’Reilly briefly weighed in on the latest drama surrounding the “whistleblower” story and disclosed steps he thinks President Trump should take to effectively move forward.

Allyn Root mentioned a couple of tweets that President Trump recently posted regarding Adam Schiff potentially committing treason and the Civil War, and he asked O’Reilly if the President is right in going that route.

O’Reilly reacted by stating that he talked with one of President Trump’s close associates and asked the person if they could deliver a special message of advice to Trump that included a strategy on how to “turn the tide” in wake of the whistleblower fallout.

“Stop with the tweeting. Stop with the Adam Schiff. Stop with all of that,” O’Reilly said in his message. “Stop with sending people like Rudy Giuliani out to defend you, and Lindsey Graham…Stop.”

“What you need to do is look the American people in the eye, like I am right now with you, Wayne,” O’Reilly continued. “Explain why you made that phone call. How as your job as Chief Law Enforcement Officer of this country — and that’s what the President is– you have a responsibility when you believe there has been corruption, to try to expose it.”

“Ten minutes right from the heart, no script to the folks. Go around all the media vehicles. They’re not looking out for you. It’s a circus,” O’Reilly declared. “Do that in a very effective way and, I think, you’ll turn the tide.”