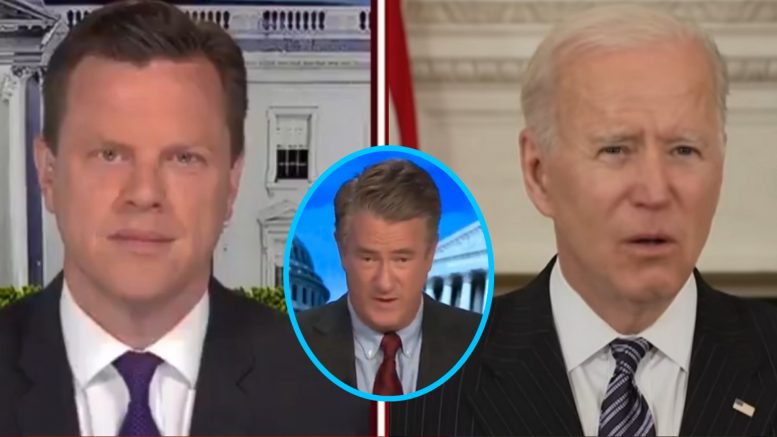 MSNBC journalist Willie Geist had a hard time trying to cover for Joe Biden’s argument as to why he isn’t actively speaking out against the Masters professional golf tournament from being played in Georgia versus his rhetoric involving the MLB All-Star game, which ultimately was moved from Atlanta to Colorado in protest of Georgia’s new voting laws.

Pressed by Fox News reporter Peter Doocy if he thinks the upcoming Masters should be moved out of Georgia, Biden said, “I think that’s up to the Masters.”

“It is reassuring to see that for-profit operations and businesses are speaking up about how these new Jim Crow laws are just antithetical to who we are,” Biden said while taking questions from the press on Tuesday.

“There’s another side to it too,” he continued. “When they in fact move out of Georgia, the people who need the help the most — people who are making hourly wages —sometimes get hurt the most. I think it’s a very tough decision for a corporation to make, or group to make, but I respect them when they make that judgment, and I support whatever judgment they make.”

In response, MSNBC’s Willie Geist told Joe Scarborough on Wednesday, “Listening to the president speaking right there is impossible to square his argument.”

“One week ago, he was calling on the All-Star game to be moved out of Atlanta and then shortly thereafter, it was. Now, he’s expressing concern about moving the Masters because of the impact it might have on working people in and around the Masters,” Geist said.

“So, in other words, there wasn’t a lot of concern for the one-hundred million dollars that experts say will be lost because the All-Star game leaves Atlanta. But now it feels that after a week of criticism, some people are catching up and saying: ‘Ooh, this actually hurts a bunch of the people that we’re trying to protect in this country right now. It’s also the position we put ourselves in. We knew immediately where ever the All-Star game was moved, everyone would look clearly at the voting law there and say, ‘Well, wait a minute. There are pieces of the voting law in Colorado that are worse than the one in Georgia.'”

“So, this is a game that probably the White House and maybe Major League Baseball, on some levels, wishes it hadn’t played at this point, but here we are,” Geist concluded. Video Below

Hardball Breaks Silence On The Swalwell Fart Noise, Claims It Came From A “Mug Scraping Across The Desk”