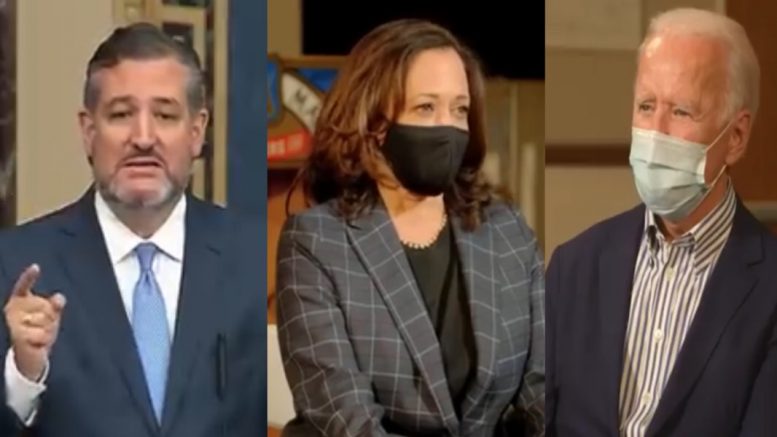 The Biden administration is reportedly weighing the potential market consequences of shutting down an oil pipeline in Michigan, drawing criticism from opponents. The administration has yet to decide on what to do with Line 5 and officials were gathering information only to present a clear picture of the situation, according to sources who spoke to Politico. Line 5 is part of a network that moves crude oil and other petroleum products from western Canada, transporting about 540,000 barrels per day. Petroleum is taken from the pipeline in Escanaba, Michigan, Fox News reported.

Senator Ted Cruz (R-TX) responded on Monday to the prospects of the oil pipeline being shut down, wondering if Joe Biden and Kamala Harris made a “bar bet” over “whether we could see $10/gallon [for] gasoline?”

Senator Cruz tweeted his question along with posting an article from Fox News regarding the pipeline.

Did Biden & Harris make a bar bet whether we could see $10/gallon gasoline? https://t.co/ZhAehyWa3z

Mr. Cruz followed up with another tweet, writing, “Since day 1, the Biden admin has actively sought to attack American pipelines. Then he greenlit Putin’s Nord Stream 2 pipeline. This harebrained strategy is disastrous for our national security & detrimental to our energy security as we head into winter.”

Since day 1, the Biden admin has actively sought to attack American pipelines. Then he greenlit Putin's Nord Stream 2 pipeline.

This harebrained strategy is disastrous for our national security & detrimental to our energy security as we head into winter. https://t.co/BtUD5IONQf

He also wondered if the Biden administration has taken “Econ 101”.

Did none of these people take Econ 101?

Meanwhile, White House spokeswoman Karine Jean-Pierre on Monday, confirmed reports regarding the shutdown of the pipeline.

“The Army Corps of Engineers is preparing an environmental impact statement on Line 5 and the construction of that replacement line,” she said. “The EIS will help inform any additional action or position the U.S. will be taking on the replacement of Line 5.”

If Biden shuts down Line 5, Millions of Americans could face higher energy bills this winter. pic.twitter.com/7ZJoDIBd0S

Sen. Kennedy Rebukes Sen. Harris For Implying That ACB Is ‘Lying’ About Pre-deciding Cases: “Are You A Liar?”

‘Read it, man!’: Flustered Biden Appears to put his Hands on Reporter When Asked About Abortion Restrictions