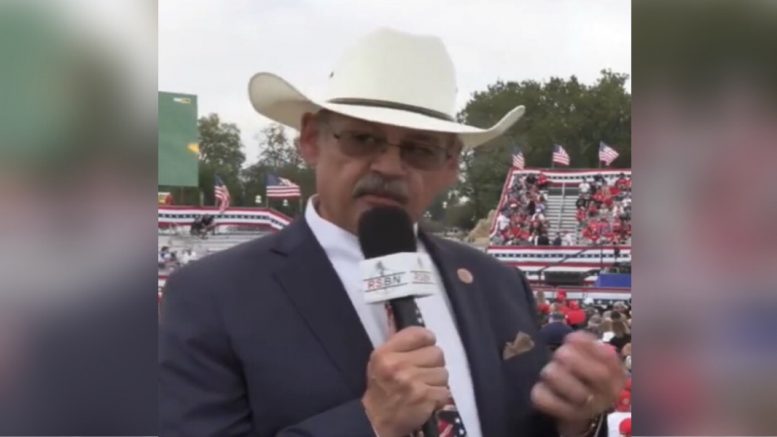 Arizona State Representative Mark Finchem (R), who is running for Arizona secretary of state, issued a statement on Friday over an “unfortunate Arizona Supreme Court ruling” that was issued this week.

The Arizona Supreme Court has unanimously ruled that the Republican-controlled Legislature violated the state constitution by including new laws banning school mask mandates and a series of other measures in unrelated budget bills, Tucson’s KGUN 9 reported.

As reported by left-wing AZ Mirror:

A group of Democratic elected officials, liberal advocacy groups and citizens filed a lawsuit after Republican lawmakers and Gov. Doug Ducey enacted a budget for the 2022 fiscal year that included numerous changes to the law that they violated the single-subject rule.

Those provisions barred school districts and charter schools from imposing face mask requirements to curb the spread of COVID-19, prohibited the teaching of “critical race theory” in K-12 schools, barred colleges and universities from requiring COVID vaccines or testing of students, and prohibited cities and counties from requiring people to show “vaccine passports.”

The ruling also blocks several new laws unrelated to COVID or the ongoing pandemic. The budget bills would have established rules for anti-fraud countermeasures in ballots for counties that choose to use them, stripped Democratic Secretary of State Katie Hobbs of the authority to defend election laws in court, and enacted other so-called “election integrity” measures. Continued Below

The Arizona Supreme Court ruling that the Arizona Legislature’s laws banning school mask mandates and a series of other measures in the budget bills are “unconstitutional” is an unfortunate and ill-conceived development, depriving Arizonans of their rights and liberties and destroying Arizona’s election integrity on a technicality.

By siding with Democrat-controlled education groups who argued that the Legislature violated a requirement that the titles of bills specifically describe all parts of the law, the Court is nullifying the will of the Arizona Legislature, itself representative of the will of the people of Arizona, for what amounts to little more than a typographical error. Continued Below

Rather than bend to the will of radical left-wing interest groups, the Court should have allowed the laws to remain in effect until that simple error could be corrected by the legislature.

Meanwhile, there has been little acknowledgement of the cause of the Legislature’s action: that our hands were forced when Governor Doug Ducey vetoed 32 bills of substantive law that would have benefited every parent with children in government-run schools and helped secure every future election. With the court’s strike down of several laws that would have taken effect, we will have to work quickly to re-enact those measures separately.

We have to protect the integrity of the vote, a foundational issue for our national sovereignty and national security. We have to safeguard our rights and liberties, given to us by God, including the rights of parents to decide what is best for their children. Those are the priorities of the Legislature. So, too, they should be the priorities of the Court. Continued Below

In June, 45th President Donald Trump called out Arizona Governor Doug Ducey for vetoing bills that would have outlawed Critical Race Theory (CRT) training for state employees and another that would prevent mailing ballots to individuals who did not request them.

Incredible to see that RINO Governor Doug Ducey of Arizona just vetoed a bill that would have outlawed Critical Race Theory training for State employees, and another that would have banned the mailing of ballots to citizens who never requested them. He did this under the guise of passing a budget. For those of you who think Doug Ducey is good for Arizona, you are wrong. Our Country needs Attorney General Mark Brnovich, who has done little so far on Voter Integrity and the 2020 Presidential Election Scam, to step it up—but patriotic Republicans in the State Senate are making up for unelectable RINOs.