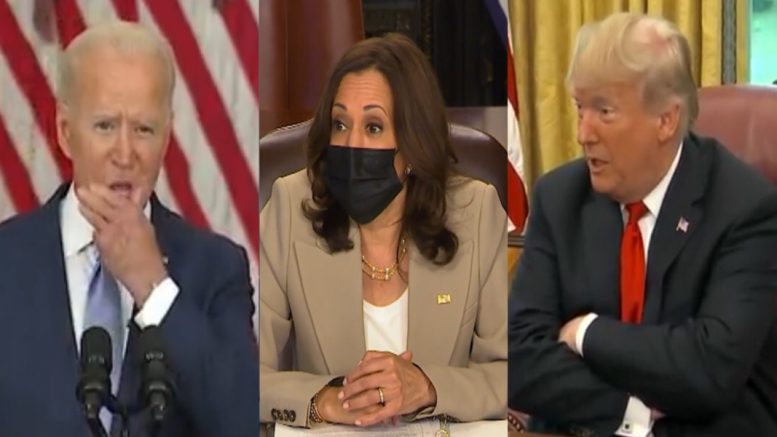 45th President Donald J. Trump issued a statement via email from his “Save America” PAC on Friday morning, highlighting the country’s mounting domestic and international problems under the Biden administration’s policies, asking: “Do you miss me yet?”

“Tragic mess in Afghanistan, a completely open and broken Border, Crime at record levels, oil prices through the roof, inflation rising, and taken advantage of by the entire world—DO YOU MISS ME YET?” Trump wondered.

Trump’s latest attack on his successor came as the situation in Afghanistan continued to deteriorate, with the Taliban capturing three more provincial capitals while the US withdraws from the war-torn country.

President Biden on Thursday ordered a large deployment of American troops to help evacuate US Embassy staff from Kabul amid the Taliban’s rapid onslaught. He said earlier in the week he had no regrets about withdrawing following the decades-long war.

US officials believe the Taliban could now retake Kabul within the next month — even though Biden previously estimated it would occur a year after US troops were removed. The White House, however, still maintains Afghan forces “have what they need” to battle the militant group. Continued Below

On Thursday, the former Commander in Chief expressed in an email statement, “Had our 2020 Presidential Election not been rigged, and if I were now President, the world would find that our withdrawal from Afghanistan would be a conditions-based withdrawal.”

“I personally had discussions with top Taliban leaders whereby they understood what they are doing now would not have been acceptable. It would have been a much different and much more successful withdrawal, and the Taliban understood that better than anyone,” Trump wrote.

“What is going on now is not acceptable. It should have been done much better,” he said. Continued Below

On Wednesday, the 45th President blasted the Senate for moving ahead with the infrastructure bill, saying the bill  “will be known as the$3.5 trillion Communist Plan to Destroy America”.

The Senate passed the infrastructure bill — with 19 Republicans — including Senate Minority Leader Mitch McConnell (R-KY) – joining all Democrats to approve the package. The vote was 69-30, as previously reported by The Freedom Times.

Good morning, America! While you were all sleeping, the Radical Democrats advanced a plan that will be known as the $3.5 trillion Communist Plan to Destroy America. This legislation is an assault on our Nation, on our communities, and on the American Dream.

It destroys our Borders and the rule of law by granting dangerous amnesty that will flood America’s beautiful cities. It will overwhelm our schools, and make our Nation less safe. It raises taxes like we have never seen, while also making many things you buy everyday more expensive (gas, groceries, and much more). And don’t forget the crazy Green New Deal.

America, you are being robbed in the dark of night. It’s time to wake up! Continued Below

According to a recent Department of Homeland Security document reported by NBC News, more than 18 percent of family units crossing the border and about 20 percent of unaccompanied minors recently tested positive for COVID-19. The document did not give the timeframe of the sample. US Immigration and Customs Enforcement has had to scramble to remove infected illegal immigrants from flights to resettle them farther away from the border, NBC News reported.

Trump highlighted the report in a email statement last week, insisting, “This is what a Rigged and Corrupt Presidential Election gets you!”

In leaked audio that surfaced on Friday morning from Fox News, DHS Secretary Alejandro Mayorkas can be heard saying of the U.S. southern border crisis, “This is unsustainable. These numbers cannot continue.”

“This is unsustainable. These numbers cannot continue.” pic.twitter.com/60sQDuApWl

Americans’ confidence in the economy is at the lowest level in 10 yearshttps://t.co/OAagdVBhKT