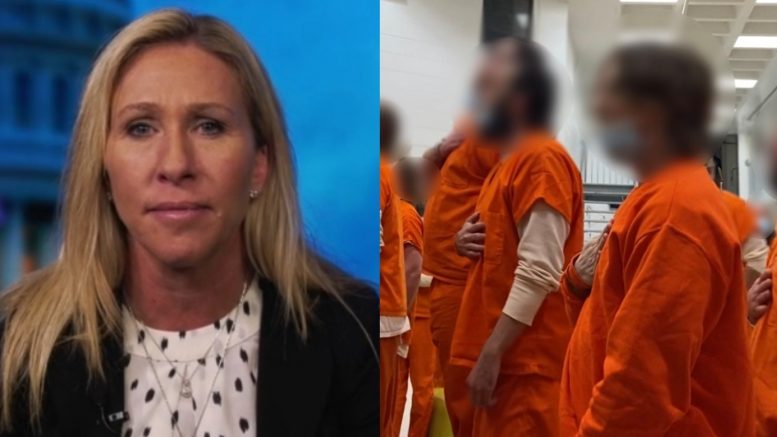 Rep. Marjorie Taylor Greene (R-GA) gave a detailed account after visiting the “Patriot Wing” of the D.C. Department of Corrections on Thursday, where accused January 6th rioters have been detained for several months.

According to The Hill, Rep. Greene was allowed to finally tour the jail and meet directly with January 6 inmates “after months of requesting access with letter after letter and call after call.” The visit lasted approximately three hours.

In a thread posted to Twitter, Rep. Greene wrote as follows:

My staff and I are writing a full report this morning on our 3+ hour long tour.

While some were shown to us in seemingly beneficial programs, others were in tortuous lockdown.

Some inmates were receiving continuing education classes, others were truly suffering from long stays in solitary confinement for “bad behavior.”

This was in a different part of the jail, not the J6 part.

Being alone surely is hell.

At what seemed the end of our tour as we were being led toward the exit, we had not seen the J6 defendants yet.

I asked to see them & was told it was not part of my tour.

I demanded to see them and would have gone scorched earth if I was not allowed and was making it known.

Phone calls were made & permission was given.

We then were taken to another section of the jail and entered the Patriot wing.

I was greeted by men with overwhelming cheers who rushed out to meet me with tears streaming down their faces.

They have felt forgotten & hopeless.

It was like walking into a prisoner of war camp and seeing men who eyes can’t believe someone had made it in to see them.

They are suffering greatly.

Virtually no medical care, very poor food quality, and being put through re-education which most of them are rejecting.

Our detailed report will outline everything we saw in every area of the jail we were allowed to see, on behalf of all inmates.

I am committed to ending this political war and seeing that our justice system is never used against Americans as a political weapon ever again.

I am also beginning a plan for real prison reform.

Our nation is broken and our people are divided.

It’s time to fix it.

Every night at 9PM, J6 defendants sing the National Anthem at the DC Jail.

And we were there tonight. pic.twitter.com/2uxGbkeqPq

Rep. Greene gave an even more detailed account of her experience while appearing for interview an with Steve Bannon, as seen here:

Last night, I was greeted by men who never thought anyone would come see them.

It was like they were prisoners of war. They had lost hope and felt forgotten.

The American people must tell the federal government that we will not stand for their authoritarianism & their tyranny. pic.twitter.com/74qIXoVuFj

In ending, here is Rep. Greene’s full interview with Julie Kelly, who is an expert on the treatment of the January 6th defendants:

‘Many People Should Be in Jail’: Rep. MTG Reacts to Clinton Campaign Allegedly Paying to ‘Infiltrate’ Trump Tower, WH Servers to Link Trump to Russia