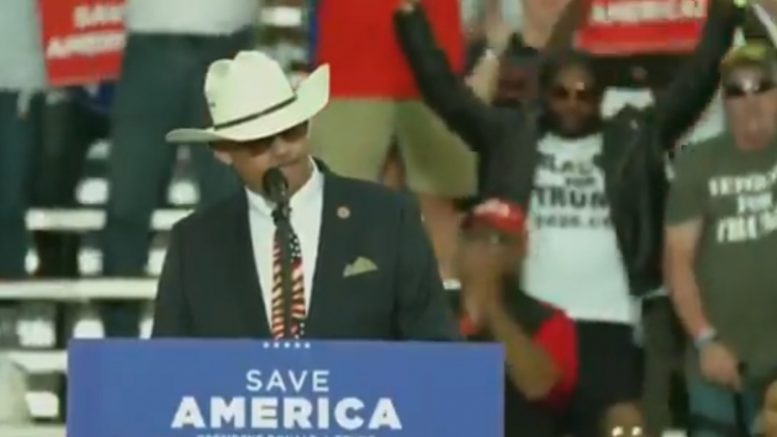 “With all of the evidence of incompetence and criminality that’s been presented to the Arizona Senate, to Congress and now to the Arizona Attorney General, the Maricopa County election should not be allowed to stand,” proclaimed Arizona state Rep. Mark Finchem while speaking at 45th President Donald Trump’s “Save America Rally” in Des Moines Iowa on Saturday.

“It must be decertified and set aside,” added Rep. Finchem, who is running for Arizona’s Secretary of State.

Related Article: AZ Sec. of State Candidate Finchem Calls For ‘Decertification Of The Arizona Election’ & ‘Arrest Of Those Involved In Tampering With Election Systems’

"The Maricopa County 2020 election cannot be allowed to stand." @RealMarkFinchem on why Arizona must #decertify — and not just because of Maricopa! pic.twitter.com/XxukUuDrbY

“So when all is said and done. When the work is complete by removing the fraud, Donald Trump won,” Rep. Finchem went on to declare after citing hundreds of thousands of potentially illegally ballots that were cast in the 2020 election.

"So when it's all said and done. When the work is complete by removing the fraud, Donald Trump WON."

Rep. Finchem is spearheading an effort to audit Arizona’s second largest county, Pima County, after a whistleblower sent a letter to the Department of Justice and every Arizona legislator claiming there are roughly 35,000 “fictitious voters” that were “inserted in the system.”

You can sign the petition to audit Pima County by CLICKING HERE.

In ending, here is a clip from Rep. Finchem’s speech where he discusses the importance of election integrity:

.@RealMarkFinchem talks about the importance of election integrity as grass roots leaders around the nation have begun to ask about audits of systems, machines, and voter rolls. #AZAudit#TrumpRally #TrumpRallyIowa @realLizUSA pic.twitter.com/DfLpg4NrCT

Senate Dem Candidate Fetterman: ‘Pennsylvanians’ on the ‘Poorer Side’ & ‘People of Color’ are ‘Less Likely to Have Their ID at any one Given Time’