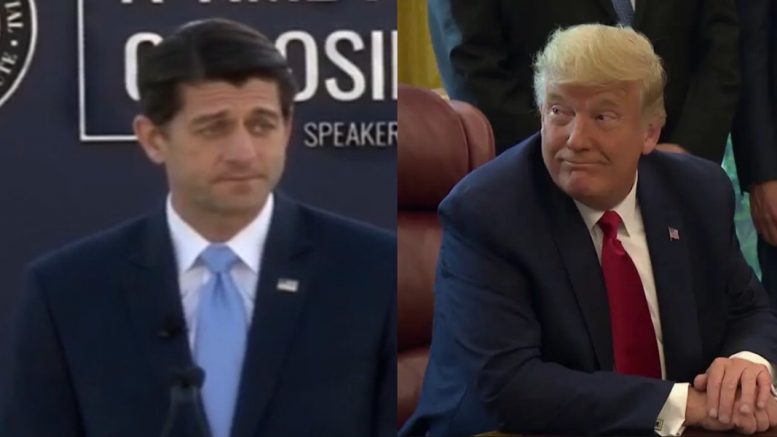 The 45th President issued two statements Friday via “From the Desk of Donald J. Trump”, firing back at former House Speaker Paul Ryan (R-WI) after a speech in which Ryan criticized Trump’s firm grip on the Republican Party.

Former President Donald Trump ripped Ryan as a “RINO” (Republican in name only) and suggested the former House speaker “has been a curse to the Republican Party”.

Ryan delivered a speech at the Ronald Reagan Presidential Library in Simi Valley, Calif., warning of the political perils facing the Republican Party if it continues on its current trajectory.

“If the conservative cause depends on the populist appeal of one personality, or on second-rate imitations, then we’re not going anywhere,” Ryan said in a clear reference to Trump.

During his speech, Ryan did not criticize Trump by name, although he left no doubts as to whom he was referring to. At one point, he said that GOP voters would “not be impressed by the sight of yes-men and flatterers flocking to Mar-a-Lago,” the former president’s private club in Palm Beach, Fla. Continued Below

In his first statement, former President said, “Ronald Reagan would not be happy to see that the Reagan Library is run by the head of the Washington Post, Fred Ryan. How the hell did that happen? No wonder they consistently have RINO speakers like Karl Rove and Paul Ryan. They do nothing for our forward-surging Republican Party!”

In a second statement, Trump wrote, “RINO Paul Ryan, who became a lame duck Speaker of the House, lost all vote-getting capability with the people he represented in Wisconsin, and was the single biggest factor, other than Romney himself, for the monumental Romney/Ryan loss in the Presidential race of 2012 (I got more votes by far, 75M, than any sitting president in history!), and he is now speaking to other Republicans telling them how to win elections.”

“Interestingly, I was in the Great State of Wisconsin when they booed him off the podium—I literally had to come to his rescue,” the former president said. Continued Below

“Ryan should instead be telling them how to stop the cheating of elections and that we would have won if Republican leadership fought the way the Democrats did,” the 45th President suggested.

“It was the day that Ryan went on the board of Fox (Fox will never be the same!) that Fox totally lost its way and became a much different place, with millions of its greatest supporters fleeing for good. Paul Ryan has been a curse to the Republican Party. He has no clue as to what needs to be done for our Country, was a weak and ineffective leader, and spends all of his time fighting Republicans as opposed to Democrats who are destroying our Country,” he said.

“As a Republican, having Paul Ryan on your side almost guarantees a loss, for both you, the Party, and America itself!” President Trump expressed. Video Below 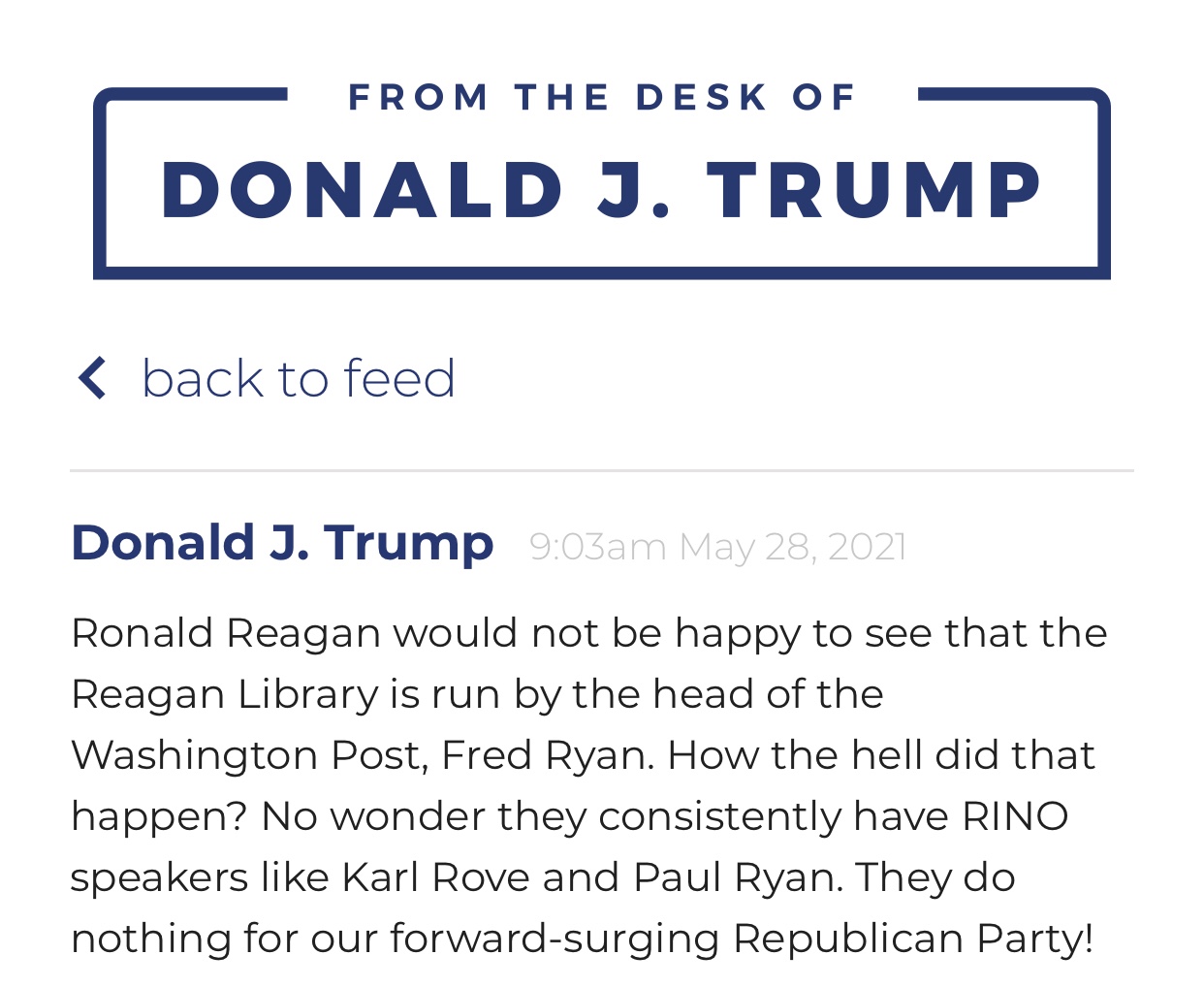 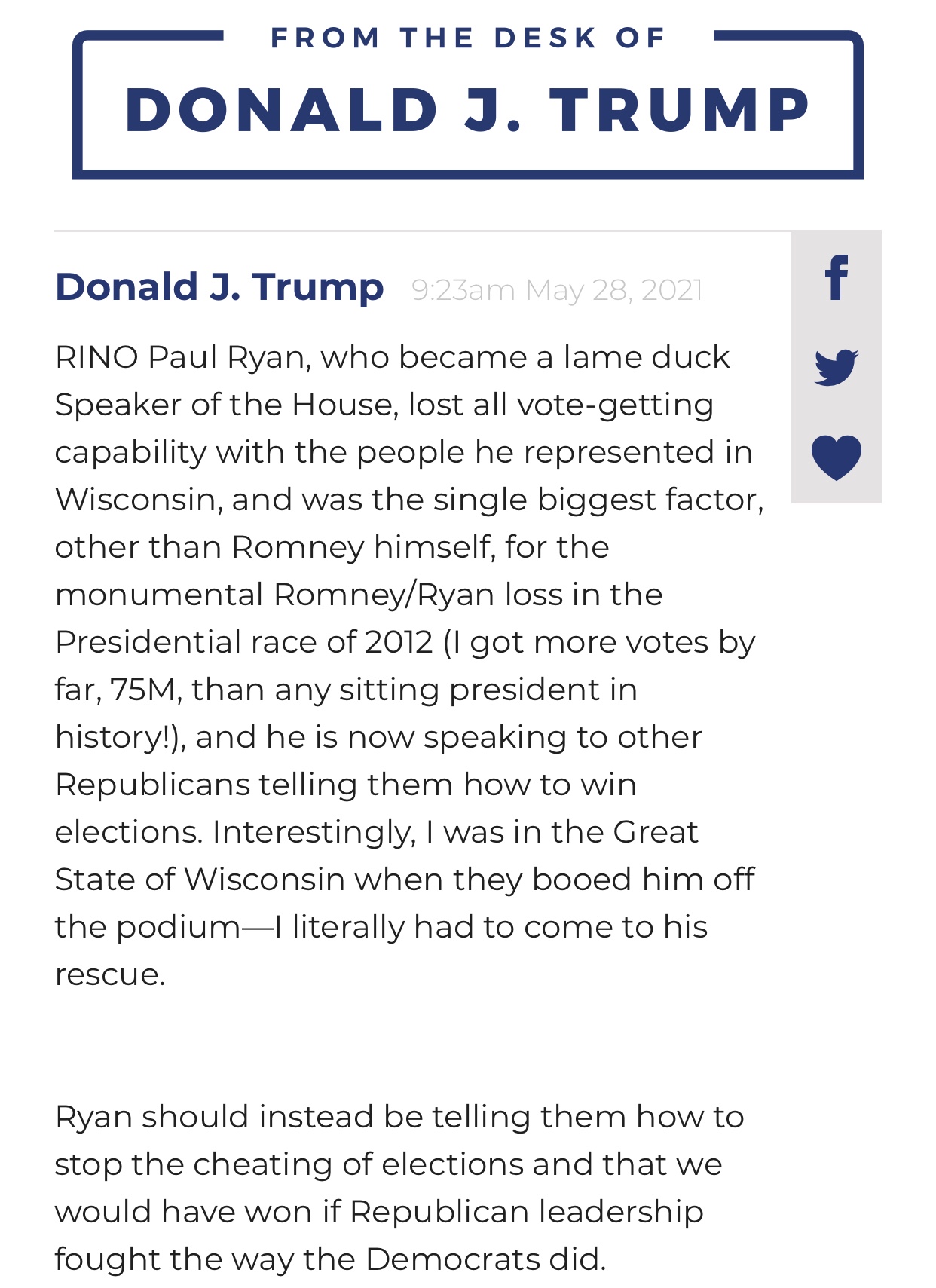 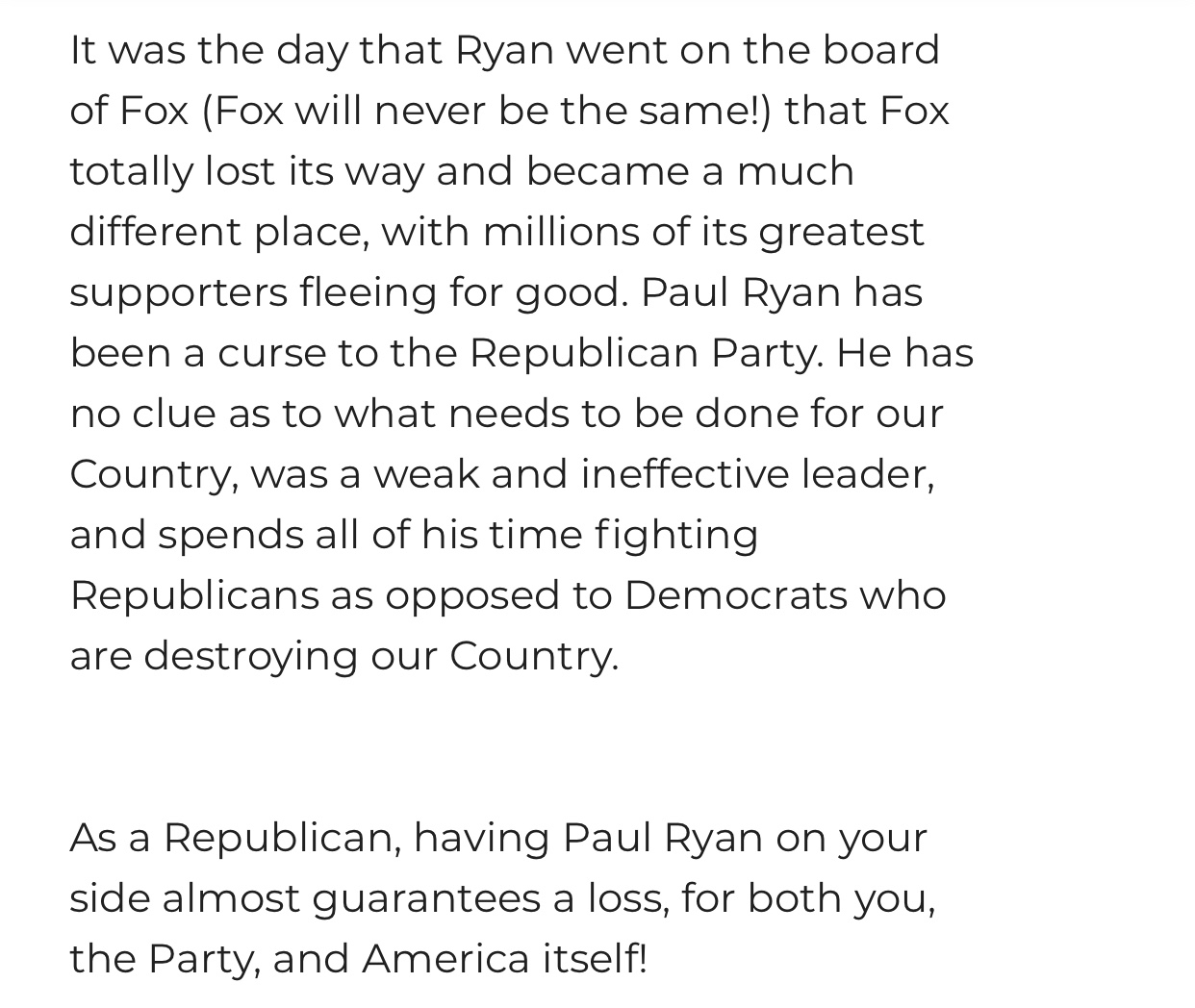