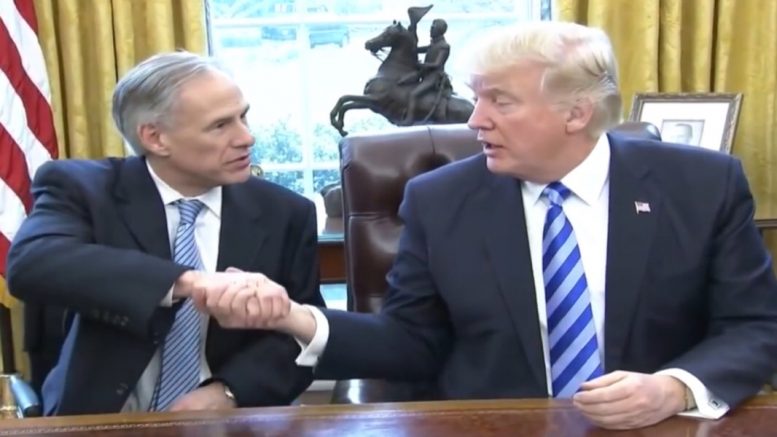 45th President Donald J. Trump is calling on Texas Governor Greg Abbott (R) to conduct an immediate forensic audit of the 2020 general election in the Lone Star State, even though he defeated 78-year-old Joe Biden 52% to 46.6%.

The former president, in a letter he sent to Abbott on Thursday, urged Governor Abbott to “act now” and conduct a review of the results this week.

Dear Governor Abbott, Despite my big win in Texas, I hear Texans want an election audit! You know your fellow Texans have big questions about the November 2020 Election. Bills to audit elections in your great state’s House and Senate were considered during Texas’ Second Special Session.

Instead, the legislature passed a watered-down amendment that doesn’t even apply to the 2020 Presidential Election. This short amendment doesn’t answer the questions Texans have about the last election. Texans demand a real audit to completely address their concerns.

We need HB 16, which was just filed in the Third Special Session. This legislation specifically addresses the 2020 Presidential Election, and enables audits for future elections.

The bill creates a process for candidates and party chairs to initiate an audit, and uses the same language as SB 97, which already passed the Texas State Senate, but did not have enough time to make it through the House during the Second Special Session. Continued Below

Texas needs you to act now. Your Third Special Session is the perfect, and maybe last, opportunity to pass this audit bill. Time is running out. Paper ballots in your state are only kept for 22 months after the election.

Your citizens don’t trust the election system, and they want your leadership on this issue, which is the number one thing they care about. It is their most important issue—one that will affect 2022 and 2024.

Governor Abbott, we need a “Forensic Audit of the 2020 Election” added to the call. We’re quickly running out of time and it must be done this week. Texans know voting fraud occurred in some of their counties. Let’s get to the bottom of the 2020 Presidential Election Scam! Continued Below

45th President Donald J. Trump also sent a letter to Georgia Secretary of State Brad Raffensperger (R) last week regarding “large scale voter fraud” that “continues to be reported in Georgia” and requested that his office “start the process of decertifying the Election, or whatever the correct legal remedy is, and announce the true winner”, as previously reported by The Freedom Times.

“I would respectfully request that your department check this and, if true…start the process of decertifying the 2020 Election, or whatever the correct legal remedy is, and announce the true winner,” Trump wrote, in part, to Raffensperger.

Why do we want an audit in Texas? Because Republicans run it and they have the votes to do it. They also have the votes to do a canvass. Start with the blue counties and catch the Dems red-handed with their cheated! Arrest some people. Fix it now before it is too late! 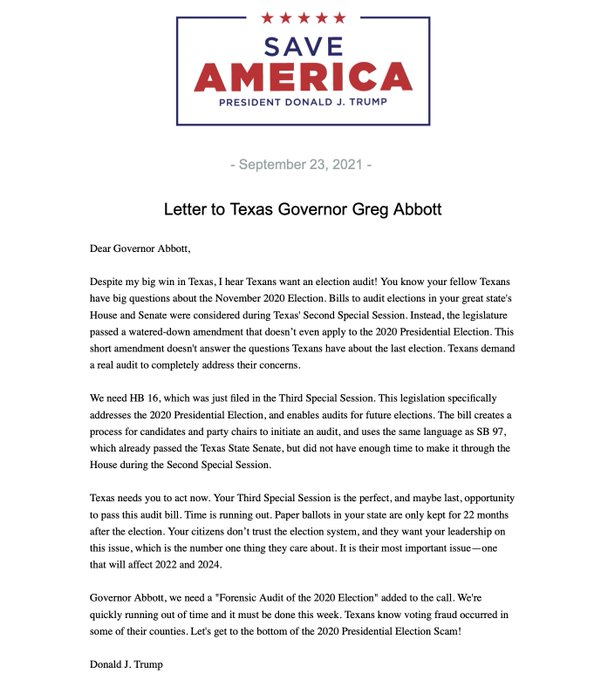