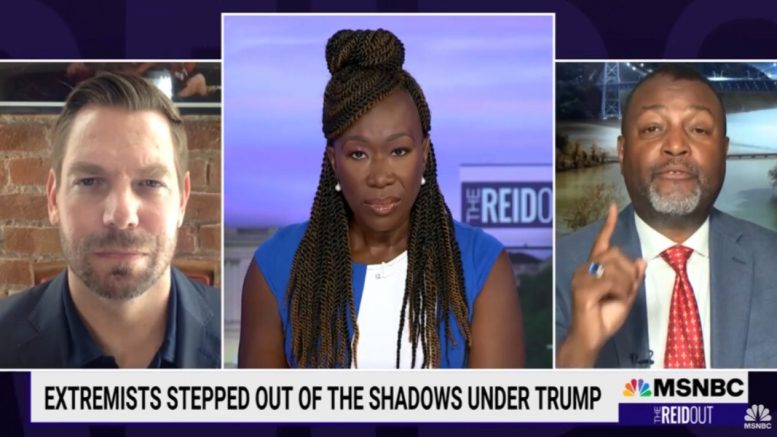 During a Wednesday airing on MSNBC’s “Reid Out”, contributor Malcolm Nance referred to Trump voters as insurgents and later claimed on Twitter that “Trump voters are planning a long term insurgency”.

“I recall saying on air what we were looking at was the cotillion, the coming out party of all disparate various factions of the conservative right and the youth movement that Steve Bannon created through the gamer community– all coming together and forming their own wing of what would be arguably paramilitary support organization for the Trump team,” Nance alleged.

“That would be the neo-Nazis, the Klu Klux Klan, the boogaloo boys, the proud boys, the militias– all then at that time came together in Charlottesville and marched like the Nazis in Nuremberg, and that was purposeful,” Malcolm Nance said.

“We thought that [that] broke up after Charlottesville. We thought that the appropriation from the nation had put them down. As I monitored them for those years, you could see they had gone underground. But what was happening was, they were congealing, and by the summer of 2020 with the George Floyd protest, they had come back together as a paramilitary of the Trump campaign, unofficially,” Nance claimed.

“After the 2020 election, they have appointed themselves an insurgency. And they carried out exactly what I predicted last November. The first insurrection of what I suspect will be many insurrections. We are dealing with an insurgency in the United States, and they are now organized under the banner of Trump,” he alleged, alongside Rep. Eric Swalwell (D-CA) who nodded in agreement to Nance’s remarks.

“These guys view themselves as this fanciful group of patriotic freedom fighters, the second coming of the Sons of Liberty & there are many of them preparing for Civil War right now.”@MalcolmNance #TheReidOut pic.twitter.com/pRkbpibxAo

Democrat lawmaker Eric Swalwell claimed during the segment, that he does not feel safe around his Republican colleagues after January 6, alleging, “We look at many of our colleagues and believe that had they not been in Congress on January 6, they would have been on the other side of the door right next to Ashli Babbitt. And so, I’m not working with them, I’m working to replace them from Congress.”

“But it’s these twin lies that are killing us, literally killing us. The lie that the election was stolen has taken the lives of many police officers,” Swallwell falsely claimed. “And the lie that vaccines do not work. … It’s killing Americans and it’s starting to kill our kids– the two twin lies to make sure they are held accountable for that. I think that’s the pathway so that we keep the majorities in both the House and the Senate.”