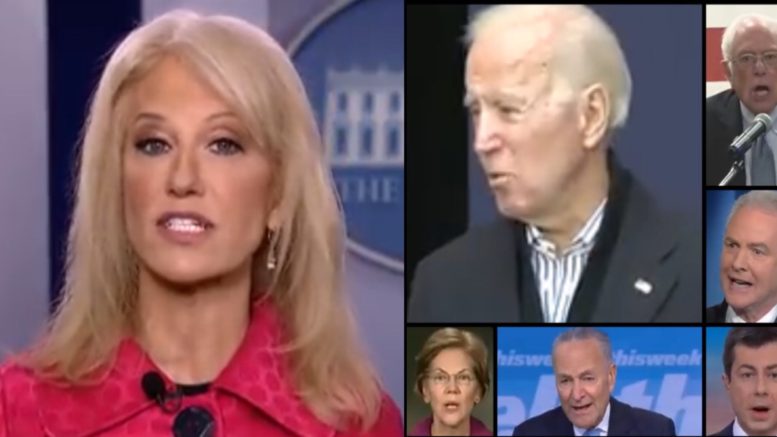 “Who can blame them? But I’m not gonna be lectured by people who voted to affirmatively fork over 130 billion dollars in cash to Iran, which helped to fund the Quds force,” Kellyanne Conway fired off. “I don’t think it went to economic development and women’s freedom and liberation in Iran, do you?”

“And so, I’m not gonna be lectured by them. And certainly not going to be lectured by people who are weak on foreign policy like Bernie Sanders and Elizabeth Warren. I mean she was ridiculous yesterday, in terms of projecting weakness– she just wants this country to be weak when it comes to foreign policy,” she continued.

“If you’re Elizabeth Warren and you’re sinking in the polls and the fundraising you’re losing to somebody who is a mayor in a small midwestern town, you’re losing to Bernie Sanders, your co-socialist, you’re losing to a vice president, who should eat the Iranian policy– who should be forced to eat the chaos that we inherited and is out there lecturing us that it escalated… I’m with former CIA director and defense secretary Bob Gates. He says that Vice President Biden has been on the wrong side of major foreign policy decisions for decades now. He certainly was on the wrong side of the Iranian one,” Conway explained. (Continued Below)

Conway agreed with Secretary of State Mike Pompeo who said, “We are cleaning up the mess we inherited,” adding, “Part of that mess is allowing people like Soleimoni to rein free and to execute his rein on terror, indiscriminately, not just on Americans, but others.”

“I’m disappointed, but not surprised the Democrats would see in this moment of Soleimoni’s death, some kind of partisan political opportunity for them. But I think it doesn’t play well with Americans. They see that Al Bagdadi and Soleimoni are now where they belong. And that they can no longer kill Americans and other people around the world,” Conway said.

Conway then pointed out the President’s strategy in Iran saying, “Number one: you don’t fork over billions of dollars in cash. That was a position of weakness and appeasement and that is a disgrace and we are cleaning up for that. That’s the Obama-Biden policy. Number two: we’ve got sanctions on Iran. And also, the other strategy is you take out Soleimoni when you can.” (Video Below)

(Related: Senator Rubio On The Elimination Of Soleimani: “The United States Had To Take Action”)