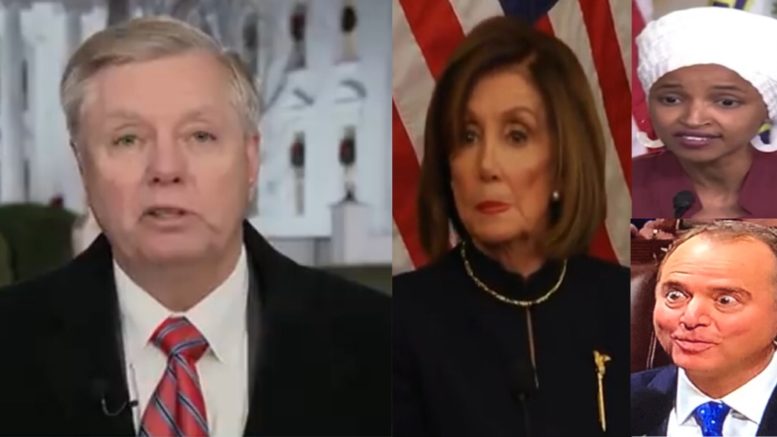 President Trump ordered the attack that killed the Iranian military mastermind, and who Secretary of State Mike Pompeo said was equally as dangerous as former ISIS leader Abu Bakr al-Baghdadi.

Qassem Soleimani is dead because he miscalculated how President Trump would respond to an impending attack against Americans in Iraq, Sen. Lindsey Graham said Friday.

“The intelligence was that Soleimani was orchestrating chaos in Iraq at our expense and throughout the region,” the South Carolina Senator explained. “The president was informed of these potential attacks and he acted. This was a defensive strike to neutralize future attacks that were planned and executed by Soleimani and the popular mobilization front: the Shiite militias in Iraq.”

Speaker Nancy Pelosi said in part in a statement, “[Thursday’s] airstrike risks provoking further dangerous escalation of violence.  America – and the world – cannot afford to have tensions escalate to the point of no return. The Trump Admin has conducted strikes in Iraq targeting high-level Iranian military officials and killing Iranian Quds Force Commander Qasem Soleimani without an AUMF against Iran. Further, this action was taken without the consultation of the Congress.”

Congressman Adam Schiff wrote on Twitter: “Soleimani was responsible for unthinkable violence and world is better off without him. But Congress didn’t authorize and American people don’t want a war with Iran. All steps must now be taken to protect our forces against the almost inevitable escalation and increased risk.”

Rep. Ilhan Omar vowed to stop President Trump: “So what if Trump wants war, knows this leads to war and needs the distraction? Real question is, will those with congressional authority step in and stop him? I know I will,” she wrote on Twitter. (Video Below)

Senator Graham said of the three House Democrats who criticized President Trump: “The last people you want to talk to about this is Democrats in Congress, Republicans in Congress. Okay?”

“As to Omar, this is not a distraction. What President Trump did is save thousands or hundreds of American lives and our allies. The attacks that they were planning against American interest, were real. The rocketing of the compound killing the contractor was foreshadowing of what was to come,” Graham continued.

“To all those Democrats who are criticizing the president, I was aware of what his options were. They were about to unleash holy hell on our people in Iraq and throughout the region. And the president decisively took action,” he said.

Senator Graham also tweeted on Friday: “We killed the most powerful man in Tehran short of the Ayatollah. This was not an act of revenge for what he had done in the past. This was a preemptive, defensive strike planned to take out the organizer of attacks yet to come.”

“When it comes to the death of General Soleimani, there is no one to blame but himself. He effectively signed his own death warrant by planning massive attacks against U.S. personnel in Iraq and throughout the Middle East,” he wrote.

“President @realDonaldTrump took decisive, preemptive action to foil a plot directed at American personnel. As to what happens next: It should be clear to Iran that President Trump will not sit idly by if our people and interests are threatened,” Graham said.

We killed the most powerful man in Tehran short of the Ayatollah.

This was not an act of revenge for what he had done in the past.

This was a preemptive, defensive strike planned to take out the organizer of attacks yet to come.

As to what happens next: It should be clear to Iran that President Trump will not sit idly by if our people and interests are threatened.