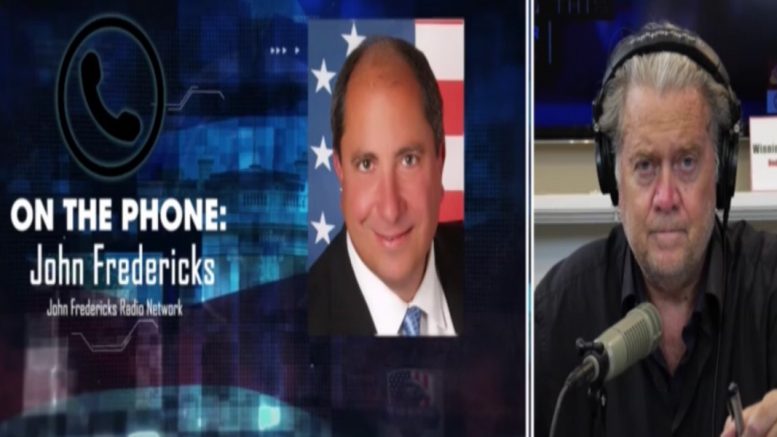 “There’s gonna be a hearing a 1:30 in front of [Chief Judge Brian] Amero in Henry County. And why this is absolutely huge is because this has nothing to do with Garland Favorito. This case has nothing to do with Bob Cheeley. This is a separate case challenging the authenticity of the election on January 5th– the runoff between [Sens. Jon] Ossoff (D-GA), [Raphael] Warnock (D-GA), [former GOP GA Senators] Kelly Loffler, and David Perdue,” Fredricks said.

“And this is being brought forward by Mike Daugherty. Perkins Coie just parachuted in. They’re panicked about Monday, because the lawsuit in front of the judge says, ‘The January 5th election is a fraudulent, illegal election, because a number of laws were broken'”, John Fredricks explained.

“Their objective in front of [Judge] Amero– and since then, they have all this evidence and plus they filed it within five days, so there’s no ‘You don’t have standing’ nonsense. Amero is gonna hear the opening arguments, Monday at 1:30. The objective that is on the table for Daugherty and his group is that the case not get dismissed and they get to discovery and they get to depositions,” he said.

“If they can do that, they’re saying they believe that this judge, when presented with all the evidence, has the power to actually nullify the January 5th election. Nullify–like it’s gone and they have to have another election,” Mr. Fredricks detailed.

“Now this has precedence in Georgia. This has happened actually three times recently where they’ve done this in House of Representative races, where there was so much evidence brought forward, that illegalities in the election were so great, as did tainted, that the judge simply said, ‘Hey, you have to have a new election, and you have to follow the rules’,” he said. Continued Below

“But here’s the deal: Why did Perkins Coie parachute now an army of lawyers into Atlanta just this hearing? … I’m telling Steve, day after day after day, people are starting to understand how illegal these elections were, the laws that were broken, the fraud that was committed,” Fredricks said.

“And if Judge Amero, whose the one guy– I mean, think about this: He’s the one guy, Steve, who’s seeing all this evidence in Fulton County– all the fraud, all the counterfeit ballots. He’s seen all the affidavits. He’s seen the Democrats hire high-powered criminal defense lawyers. Ameros seen it all!” he declared.

“There’s a possibly this judge– after the depositions and the discovery says, ‘Hey, you know what? This can’t stand.’ And he actually has the power to call for a new election. Then, all hell in Georgia breaks loose!” Fredricks predicts. Video Below

As reported by UncoverDC, Mike Daugherty filed the lawsuit in January asking for the run-off to be nullified because of the alleged election fraud in Georgia. Judge Amero granted a motion to unseal and inspect Fulton County Absentee Ballots from the 2020 election. Continued Below

As reported by Clarion News:

Originally filed in Fulton County, Daugherty moved the case to Henry county for strategic reasons. Daugherty made plans to file the case in November because it is extraordinarily difficult to get courts to hear election cases because of their reluctance to interfere in the business of the people. In an interview on the John Frederick’s show on Thursday, Daugherty explained his thinking:

“As we have witnessed, election law is very difficult to adjudicate and enforce around the country. You essentially have days, not weeks not months, to bring your case and I think that’s because the judiciary does not want everyone suing the heck out of each other. Still then, [who’s ever] elected ends up having their time all in court fighting frivolous litigation lawsuits…we had the luxury of the runoff because…essentially you have five days from when it’s certified [to file].”

The case is not a federal case, nor is it about Trump. Daugherty explained that he has been laying low since January because he wanted to allow cases like Garland Favorito’s to work through the system to bring evidence to light. Daugherty explained:

“[The reason] this case is such a big deal is because if we win, we go back to red in the Senate. We don’t believe that Purdue should even have had a run-off and we really don’t believe either one [should have had one]…the point is, regardless, we want transparency and we want the law followed.”

“I really think the senate’s red at a minimum,” Daugherty continued, “I’m appalled at people that just want us to whistle past the graveyard. We got out of Fulton County and got Judge Amero because when you sue a county, the judges in that county have to refer the case up, but this case isn’t about just Fulton County. We’ve sued Coffee County, we’ve sued DeKalb county, and, just yesterday, we added Cobb County.”

The suit has garnered the attention of the big guns law firm Perkins Coie; attention Daugherty wears as a badge of honor. “Perkins Coie parachuted into our case, so we know that it’s serious to them.” Daugherty declared that his objective on Monday is to “avoid a motion to dismiss and to keep it within the four corners of the law.” Daugherty has been adamant that he does not want to politicize the case.

AZ Sen. Rogers Calls On Red States To Audit & Expose Blue Counties: ‘They Will All Go To Jail’