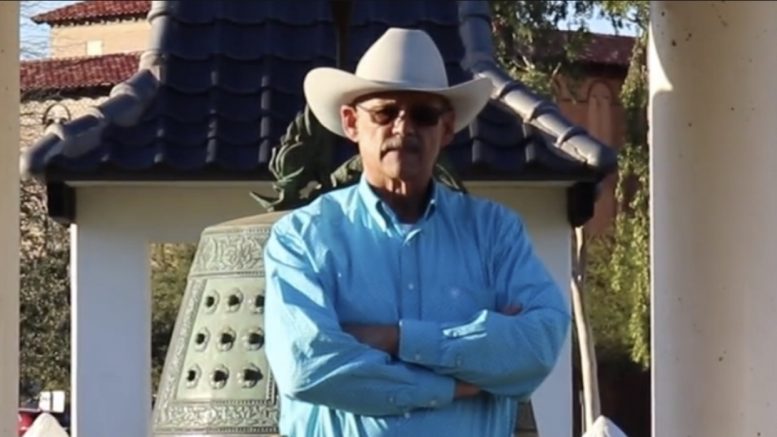 State Representative Mark Finchem (R-AZ), who is running for Arizona Secretary of State, released a new campaign video over election integrity, securing the U.S./Mexico border, and standing up for freedoms against medical mandates.

Mr. Finchem received a “complete and total” endorsement from 45th President Donald J. Trump in September and called the Arizona lawmaker a “true warrior” that “has fought for our Country right from his earliest moments in government”, adding, “He will never let the people of Arizona down!”

“I’m Mark Finchem, and I’m running for Secretary of State to make sure that our elections are held secure, our borders are enforced, and your civil rights are protected,” the Arizona secretary of state candidate said.

He explained how to “secure an election”: “Paper ballots, hand-counting. It’s that simple. You add then watermarks and an audit trail to the ballots. You use paper voter rolls, not electronics. And you do not permit electronic tabulation equipment to be the primary means of counting the votes.”

“Elections belong to the people. They don’t belong to the government, and without election integrity, you have no guarantee that your voice is heard,” Rep. Finchem said.

The Arizona lawmaker also said “securing our border means stopping the flow of drugs, the flow of children coming across our border to be abused and raped, and to make sure that the law of the land is enforced”. Continued Below

Mr. Finchem also stands for Civil Rights, saying in his campaign video, “Protecting our freedoms means no jab mandate, no mask mandate, no mandate of any kind that restricts your movement in a free society.”

“The next secretary of state is gonna have to be a pretty courageous individual”, he said, before quoting his favorite Bible scriptures: Exodus 18:21—  “But select capable men from all the people—men who fear God, trustworthy men who hate dishonest gain—and appoint them as officials over thousands, hundreds, fifties and tens,” as per New International Version.

“It’s about serving other people. It’s not about serving yourself. And that’s one of the reasons I’m running for secretary of state — to reestablish good order, to reestablish in the small way that I can, Civil Rights, to see to it that people consent to be governed carries meaning again, because right now, I don’t know that it does,” Rep. Finchem said. Video Below

The purpose of this Bill is to provide full transparency of vital election records, more specifically digital images of ballots cast, according to a December 28, 2021 press release.

“Elections should be done in private, but the counting of votes must never be a secret endeavor. There is no reason why unalterable electronic ballot images should not be a public record, open for all to inspect,” says Representative Finchem. “Elections belong to the people, they don’t belong to the government, and as such, along with the consent to be governed, the People retain the right to examine the result.”

The purpose of this Bill is to provide relief to the People of Arizona who have become fearful of what their state government might do if the power to force vaccination upon our citizens remains on the books, an additional press release states, also dated on December 28, 2021.

“Our civil rights, and personal franchise are protected by our Constitution, they are not to be discarded nor abrogated for for any reason; and it is clear that we find ourselves on the slippery slope of tyranny. When a government official, whether elected or bureaucrat, has, through the exercise of police powers, the authority to order a resident of this state to accept an injection of any kind, and by force if necessary, civil rights no longer exist,” said Rep. Finchem.