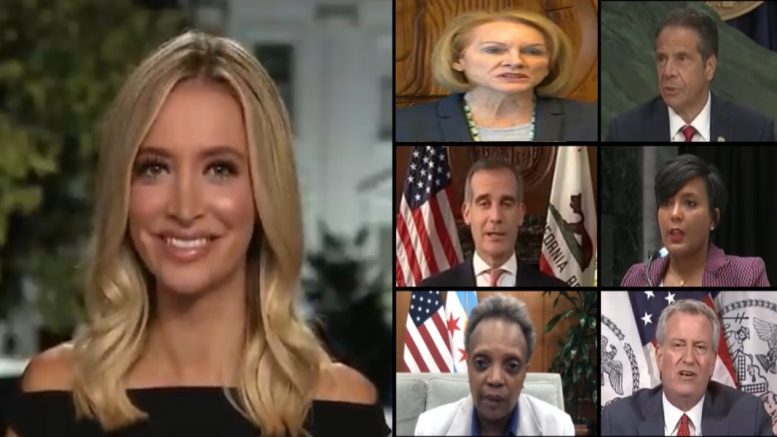 White House press secretary Kayleigh McEnany spoke with Fox News‘ Sean Hannity Tuesday after she had scolded reporters during Monday’s press briefing, for failing to ask a single question regarding a violent weekend, after an 8-year-old girl died in Atlanta, following a surge in gun violence.

“I’m a little dismayed that I didn’t receive one question on the deaths that we got in this country this weekend,” McEnany informed reporters.

Kayleigh McEnany told Sean Hannity that she was “asked more than 24 questions about the Confederate flag, not one about these children”.

The press secretary was referring to the many questions she had received from reporters during Monday’s briefing, which were about the President’s tweet regarding NASCAR driver Bubba Wallace.

President Trump tweeted on Monday: “Has @BubbaWallace apologized to all of those great NASCAR drivers & officials who came to his aid, stood by his side, & were willing to sacrifice everything for him, only to find out that the whole thing was just another HOAX? That & Flag decision has caused lowest ratings EVER!”

McEnany told Hannity: “We need to know the faces of these kids, know their names, Secoriea Turner, who lost her life in Atlanta. This is a tragedy. This is happening on America’s streets because of Democratic mayors and Democrat governors. There’s fundamental uninterest in getting to the bottom of it by many in the press. It’s despicable, and it just goes to show how out of touch people are here in the swamp.” Continued Below

Hannity told McEnany than politicians who have served in Washington, D.C. for decades didn’t do “opportunity zones, criminal justice reform, police reform, or historically black colleges,” adding that they “didn’t shatter record after record low of unemployment for minorities in America, and they had eight years to do it.”

“Why didn’t they do it? Words are one thing, symbolisms one thing, actions or success are another,” he pointed out.

The White House press secretary agreed with Hannity, saying: “That’s exactly right. And you listed off what President Trump did with action, making permanent HBCU funding, criminal justice reform, lowest black unemployment rate in history. But what do Democrats have to offer us? Failed experiments like CHOP, where two children died in an autonomous zone, failed cities like Chicago, where you saw 13 killed last weekend, 77 injured– like New York City, where you’ve had for 3 weeks a many fold increase in shootings.” Video Below

“This is what leftist polices have gotten us, in the black community in particular– poverty, crime in the cities. And it’s taken President Trump to rescue people from that scenario and give hope and opportunity,” McEnany said.

When asked if she is bothered by the press attacking her for doing her job, McEnany told Hannity, “I take it as a badge of honor. They’re criticizing me? Guess what that means? I’m getting to them, I’m pushing their buttons.”

“I’m not gonna play their game that they like to play with any Republican who comes to this town. I’m speaking the truth. That’s what I intend to do and the truth is that this president has done so much for this country, they don’t give him an ounce of credit. But we will give him credit from the White House podium,” she added.

(Related: McEnany Scolds Reporters Over Lack Of Questions ‘On The Deaths That We Got In This Country This Weekend’)