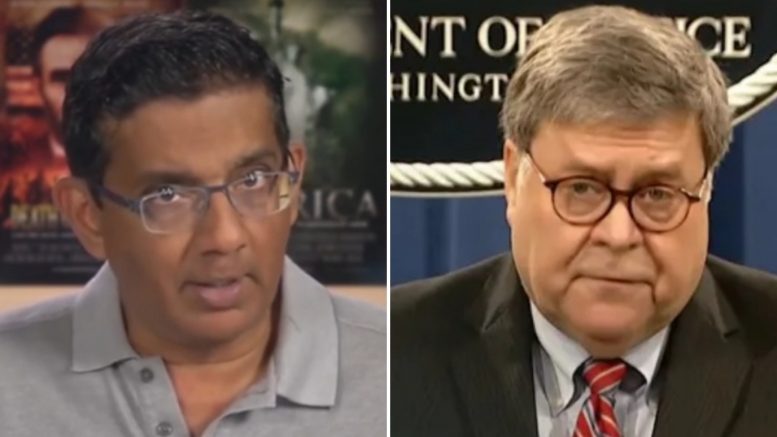 Dinesh D’Souza exposed how former Attorney General William Barr may have intentially roadblocked an investigation into voter fraud that allegedly took place in Pennsylvania during the 2020 election.

“So did Trump’s Attorney General Bill Barr torpedo a proposed voter fraud investigation in Pennsylvania?” D’Souza wrote in a description to a video he posted to Rumble on Friday. “Only an audit of the type proposed by state senator Doug Mastriano might reveal the full cost of Barr’s treachery.”

In the video, Dinesh read a ‘disturbing letter from former United States Attorney for the Eastern District of Pennsylvania William McSwain, who complained that the 2020 election was a “partisan disgrace.”

McSwain points out in his letter that even before the election, Pennsylvania’s Democrat attorney general Josh Shapiro declared that Biden was going to win the state, which was viewed by many as an inappropriate prediction made by the chief legal official who was responsible for supervising the integrity of the state’s election.

“On election day and afterwards our office received various allegations of voter fraud and election irregularities,” McSwain said. “As part of my responsibilities as U.S. attorney, I wanted to be transparent with the public and investigate fully any allegations.”

He continued, “Attorney General Barr, however, instructed me not to make any public statements or put out any press releases regarding possible election irregularities. I was given a directive to pass along serious allegations to the state’s attorney general for investigation — the same state attorney general who already declared that Trump can not win.”

Related Article: Dinesh D’Souza Has A New Year’s Epiphany About How Biden Was ‘In On The Steal’: “Doesn’t Joe Biden Seem Eerily Cocky On Election Night?”

In response to McSwain’s letter, Dinesh stated as follows:

In other words, here’s William Barr, the Attorney General of the United States, telling McSwain “Listen, don’t put out anything on election fraud. Don’t even investigate it. If you get any complaints, pass them along to the Democratic attorney general of the state” who Barr should’ve surely known was gonna toss those allegations in the trash. Video Below