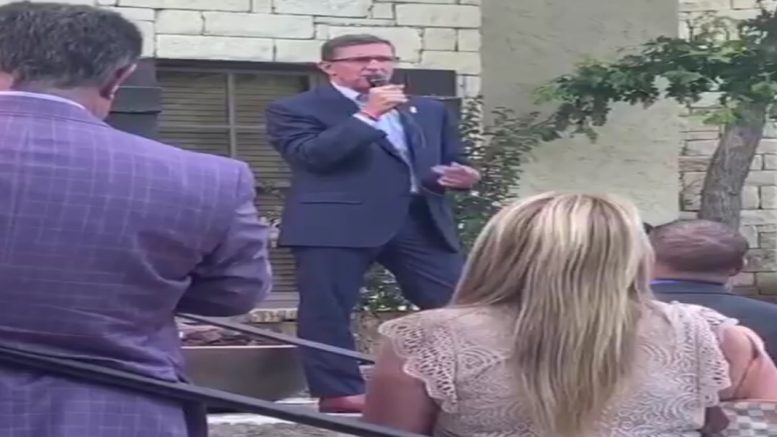 Retired United States Army Lieutenant General Michael Flynn was seen in Oklahoma on Friday ahead of the Saturday’s OKC Freedom Rally, speaking to patriots at an event.

Flynn was heard telling supporters, “I do stay in close contact with the president”, referring to the 45th President of the United States.

“So a couple of things that y’all need to know. This is how I believe and this is what I believe is happening in this country. I do stay in close contact with the president, and I will tell you he’s going to be in Ohio tomorrow about the same time we’re gonna be here in Norman, [Oklahoma],” General Michael Flynn said.

Flynn was referring to the event being held in Wellington, Ohio, where President Trump will hold a major rally on Saturday, June 26, 2021 at 7:00PM EDT in support of Max Miller, who Trump has endorsed for election in Ohio’s 16th Congressional District.

“He’s gonna be in Sarasota, Florida. I think it’s either the 3rd or 4th of July. And I basically asked him to just rip them a new one,” Flynn added, referencing a rally sponsored by Save America, Saturday, July 03, 2021 at 8:00 pm (EDT).

“This Save America rally is co-sponsored by the Republican Party of Florida and marks President Trump’s further support of the MAGA agenda and accomplishments of his administration. Please join us for a HUGE fireworks show to celebrate America following President Trump’s remarks to conclude a full day event commemorating our Great Country!” an email statement from Trump’s “Save America” PAC read this week. Video Below

General Flynn also stated, “There is so much fake information out there … and it will continue. I will stand here and tell you that the worst times have not arrived yet, and I believe we’re going to have more sacrifice here in the coming months.” Video Below

Michael Flynn (6/25) states there is a lot of fake information out there. He also says that the worst times have not arrived yet and that there will be more sacrifice in the coming months. pic.twitter.com/wa7OmiwDEv

Michael Flynn (6/25) says that this country was made by man and can be destroyed by man. He also states that Oklahoma is in a physical, emotional, intellectual, and spiritual war. pic.twitter.com/V5PVavBDCb

Michael Flynn (6/25) states that it drives him crazy that we're talking about communism in the United States. He also states that he's willing to give his life for the country. pic.twitter.com/0l0MCdY5vB

(Related: General Flynn: ‘Something Is Going to Happen — They Must Create Noise Prior To The AZ Audit Really Starting To Bubble Out’)