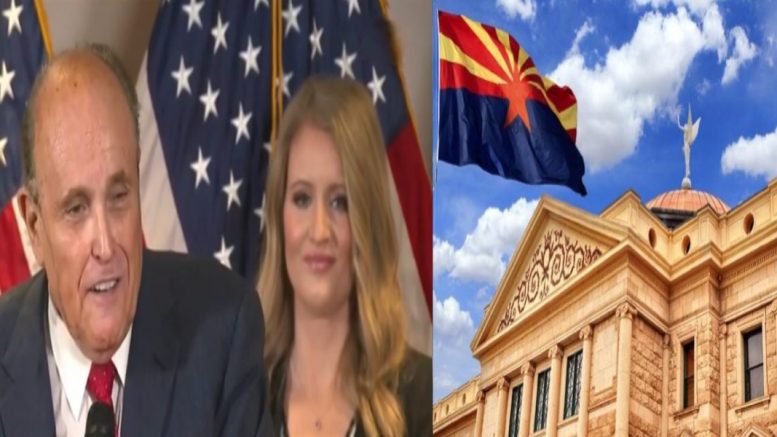 The Arizona State Legislature is set to hold an “urgent” public election integrity hearing at the Hyatt Regency Phoenix on Monday, November 30, which will include President Donald Trump’s lawyers Jenna Ellis and Rudy Giuliani.

“Arizona State Legislature to hold hearing on election integrity Monday, November 30. Mayor @RudyGiuliani and I will be present on behalf of President @realDonaldTrump,” Ellis announced on Twitter Friday afternoon.

🚨🚨🚨Arizona State Legislature to hold hearing on election integrity Monday, November 30. Mayor @RudyGiuliani and I will be present on behalf of President @realDonaldTrump.
https://t.co/b8ORVzEakP

According to select members of the Arizona State Legislature, the hearing is designed “to gather the evidence that justifies calling a special session to contemplate what happened and take immediate action accordingly.”

“We are pleased that the State Legislatures in Pennsylvania, Arizona, and Michigan will be convening hearings to examine the November 3rd presidential election,” Ellis said in a statement provided by the GOP lawmakers.

State Legislatures are uniquely qualified and positioned to hold hearings on election irregularities and fraud before electors are chosen. As established in Article 2, Section 1.2 of the United States Constitution, State Legislatures have the sole authority to select their representatives to the Electoral College, providing a critical safeguard against voter fraud and election manipulation, the select members of the Arizona State Legislature’s statement said.

Meanwhile, Ellis tweeted the hashtag “#ArizonaHearing” on Twitter, and asked followers to “Get it trending!!!”