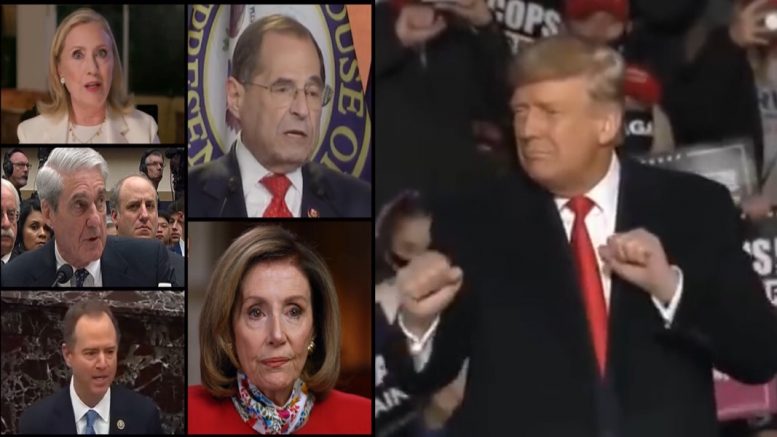 The 45th Commander in Chief issued a statement Thursday via email from his “Save America” PAC, taking a victory lap in regards to “illegal Witch Hunts” against him following testimony by former White House counsel Don McGahn related to special counsel Robert Mueller’s report and after the release of an inspector general report over last summer’s protests at Lafayette Park.

“This week I have been totally exonerated by the Inspector General in the clearing of Lafayette Park, despite earlier reports that it was done for political purposes,” former President Donald Trump said in a statement. “And I have also been totally exonerated in Congress by the testimony of former White House lawyer Don McGahn. It came, it went, and it was a big ‘nothingburger.’”

As president, Trump gave a speech from the Rose Garden on June 1, 2020, before walking to the burnt St. John’s Episcopal Church just after protesters were cleared from the area, where the president stood for pictures holding a Bible. The night before, a large crowd threw water bottles and other objects and shot fireworks at police, clashed with officers, and lit buildings on fire, including the church. Democrats, including now-President Joe Biden and now-Vice President Kamala Harris, accused Trump of clearing the protesters the next evening to hold a photo-op, Washington Examiner reported.

Mark Greenblatt, the inspector general of the Department of the Interior, released a report on Wednesday disputing the Democrat politicians’ false claims.

Democrats sued McGahn in 2019, claiming to need his testimony on the instances of possible obstruction of justice that Mueller outlined in his report. Then-Attorney General William Barr and then-Deputy Attorney General Rod Rosenstein concluded justice had not been obstructed. McGahn served as counsel from Trump’s inauguration until resigning in late 2018, and the special counsel said McGahn told his investigative team that Trump told him Mueller must be removed, a claim that the former president denied, according to Washington Examiner. Continued Below

McGahn testified behind closed doors before the House Judiciary Committee on June 4, saying  that President Trump had told him to tell Rosenstein that Mueller was conflicted and could not serve as special counsel.

McGahn testified Friday: “Inflection point … with that I meant a point of no return. If the acting attorney general received what he thought was a direction from the counsel to the president to remove a special counsel, he would either have to remove the special counsel or resign. … It seemed to me that it’d be easier for me to not make the call and take whatever heat or fallout there would be than to cause, potentially, a chain reaction that I think would not be in the best interest of the president.”

“Now that I have been totally exonerated on the Mueller Witch Hunt with a charge of No Collusion, I have often wondered, if a fake investigation is illegally started based on information provided and paid for by the DNC and the Clinton campaign, shouldn’t they be held accountable? Not to mention, wasting tens of millions of taxpayer dollars and interfering with years of a presidential administration? I fought the made-up Hoax strongly and effectively, and I won,” President Trump said.

“Then they fabricated, out of thin air, the fake allegation that I obstructed justice, and I won that too. Think of it, how can you obstruct justice when you were fighting a false and illegally submitted narrative?” he wondered.

As reported by Washington Examiner:

Steele put his research together at the behest of the opposition research firm Fusion GPS, funded by Hillary Clinton’s presidential campaign and the Democratic National Committee through the Perkins Coie law firm.

The 45th President concluded: “But fear not, the Radical Left, country destroying, illegal Witch Hunts continue, and I will win those too!” 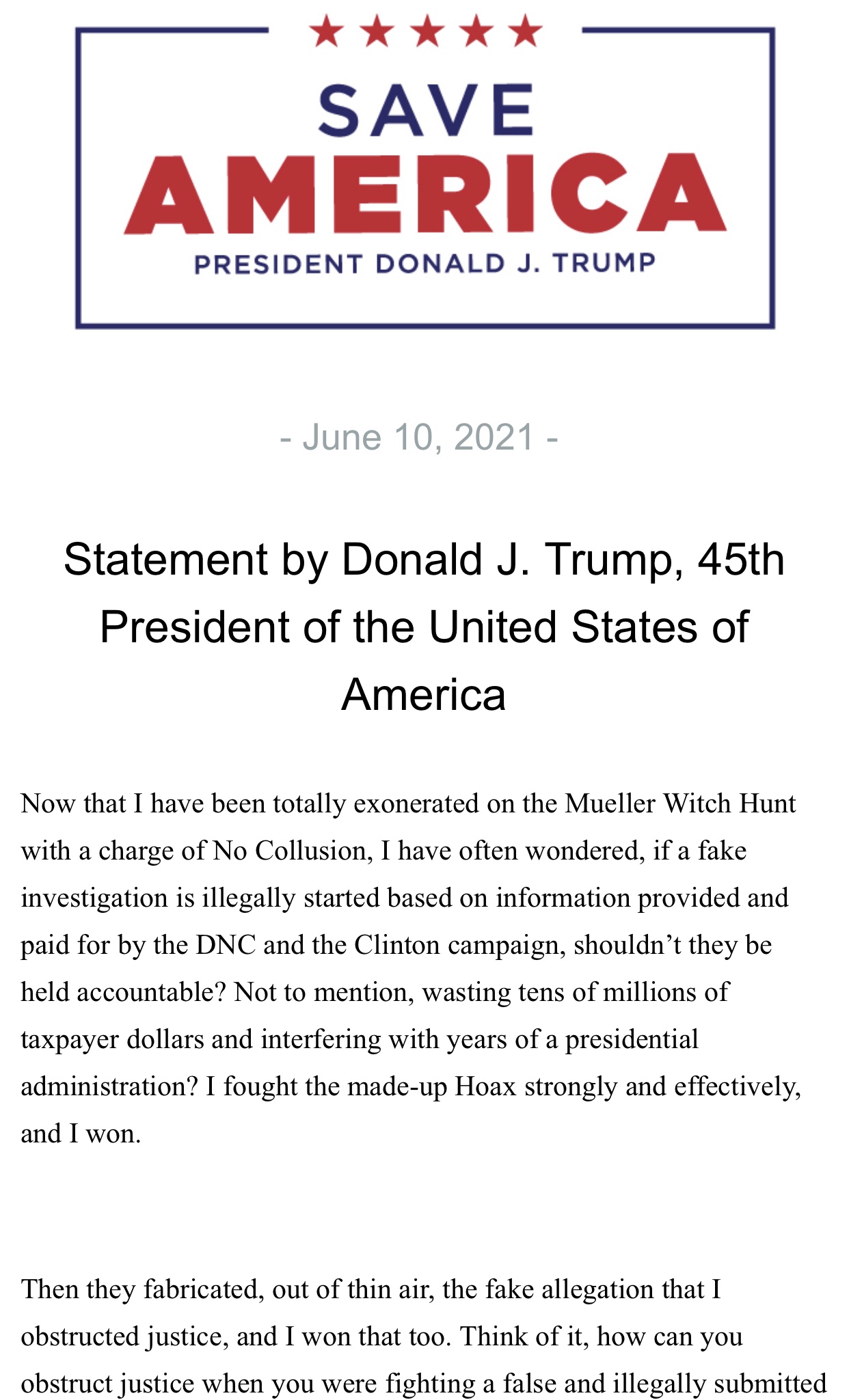 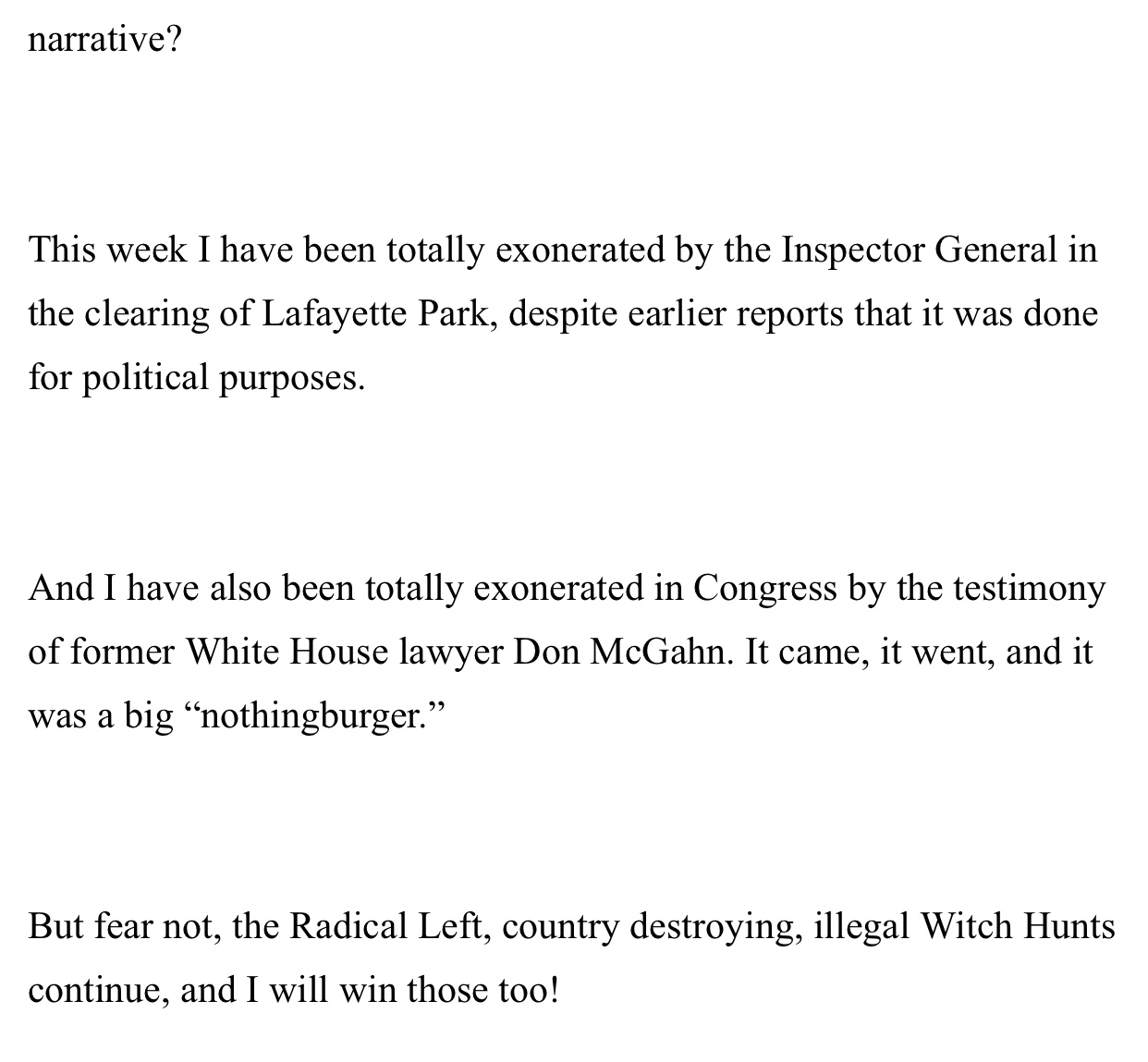