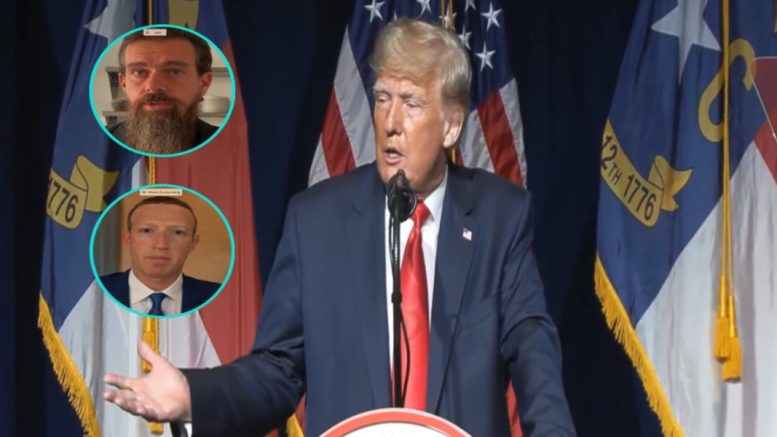 During a Monday interview on Fox Business, the 45th commander-in-chief slammed big-tech censorship as Twitter and Facebook have suspended him from their platforms.

Most recently, Facebook announced that former President Donald Trump would be suspended for two years, until Jan. 7, 2023, and will then be subject to another review to evaluate the “risk to public safety.” Twitter, in January, went further than Facebook and instituted a permanent ban on Trump.

“These are bad people. These are dangerous people. It’s got to be stopped, because our country is in danger,” President Trump told host Stuart Varney regarding big tech censorship.

“You know, [Mark] Zuckerberg would come to the White House to have dinner with me, couldn’t have been nice– ‘Sir, you’re number one. Congratulations. You’re number one on Facebook.’ All of this crap. He’d bring his wife. It’s amazing actually, when you think about it. But no, they have to be stopped, and they will be stopped eventually. Eventually, they’re gonna be stopped,” Trump predicts.

Asked why he thinks social media is censoring him, the former president said, “Because my voice is very strong. My voice is very powerful. I got 75 million votes, which is more than any sitting president ever got. I won the election, but they cheated.”

“And by the way, with Facebook and Zuckerberg with a 5 million dollars worth of phony lock boxes that he put [out]– some of them had 96% Biden votes in them. … They were just like dumping ballots. It was a phony deal, and let’s see how that all turns out. But there’s a lot of litigation coming, and what they did is a disgrace,” he expressed. Continued Below

“You know, they allow dictators that say ‘Death to America’. That’s okay. ‘Death to Israel’. That’s okay. But with me, they take me off because they are radical left crazy people, and they are destroying our country, and they don’t want to hear a sane voice,” Trump said of social media.

Asked what he can do about the platforms who banned him, President Trump replied, “Well, we’ll see. We’re working on things right now. I think I’m getting the word out, but it certainly can’t be the same yet. But they are a disgrace to our country, and I think the people of this country are very, very angry. … We’ll see what happens. … There’s gonna be a lot of litigation very soon. You’ll see that, and we’ll see how it all comes out. And it’s gonna be very big litigation”. Video Below

The former president also said he may consider Florida Governor Ron DeSantis (R) as a running mate if he decides to run in the 2024 presidential election.

Trump further opined over the economy and bitcoin: