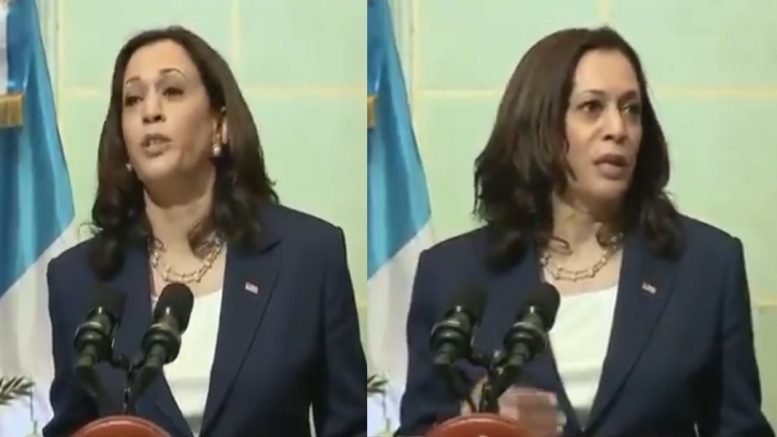 At long last, Kamala Harris revealed on Monday that she does not plan to visit the U.S. southern border, claiming it would be nothing more than “grand gestures”, even though she was appointed to oversee the border crisis. She also told migrants to “not come”, warning that the “United States will continue to enforce our laws and secure our border”.

Harris’ remarks came during a press conference with Guatemalan President Alejandro Giammattei on her trip to Guatemala.

Kamala Harris said she “believes” any illegal aliens who attempt to enter the United States through non-legal channels will be turned away if they arrive at the border.

“I want to emphasize that the goal of our work is to help Guatemalans find hope at home,” she said after her bilateral meeting with Guatemalan President Alejandro Giammattei.

“At the same time, I want to be clear to folks in this region who are thinking about making that dangerous trek to the United States-Mexico border: Do not come. Do not come,” Harris said.

‘The United States will continue to enforce our laws and secure our border,” the Democrat politician insisted. “There are legal methods by which migration can and should occur, but we, as one of our priorities, will discourage illegal migrations. And I believe if you come to our border, you will be turned back.” Continued Below

During a question and answer portion of the press conference, Harris claimed visiting the U.S./ Mexico border would just be a “grand gesture”.

“The reason I am here in Guatemala as my first trip as vice president of the United States is because this is one of our highest priorities. I came here to be here on the ground, to speak with the leader of this nation around what we can do in a way that is significant, is tangible and has real results. And I will continue to be focused on that kind of work as opposed to grand gestures,” she alleged.

Harris was named “border czar” by Joe Biden in March. Continued Below

Meanwhile, Guatemalan President Alejandro Giammattei said in a CBS News interview Sunday that the Biden administration is to blame for sparking the migration crisis, adding that he and Harris “are not on the same side of the coin” on migration.

VP HARRIS IN GUATEMALA: "I want to be clear to folks in this region thinking about making that dangerous trek to the United States/Mexico border: Do not come. Do not come.”

"The United States will continue to enforce our laws and secure our border." pic.twitter.com/gRBWBpt6PS

A reporter just asked VP Kamala Harris why she and President Biden have refused to visit the Southern border to see the crisis firsthand.

Her response—delivered from a podium in Guatemala—was that going to America's border would be nothing more than "grand gestures." pic.twitter.com/ExbUfi5dVv

Kamala Harris received a not-so-warm welcome when arriving in Guatemala on Sunday as part of her so called “foreign policy” trip that focused on stemming migrants surging across the U.S./Mexican border.