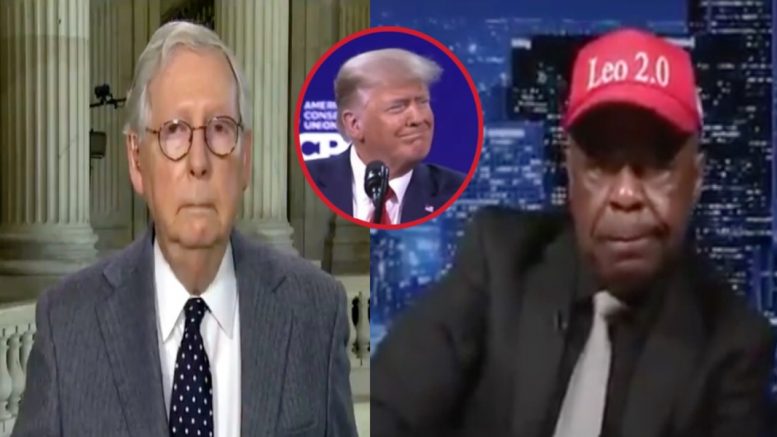 During a Wednesday airing of Fox News’ “The Story” with host Martha McCallum, Senate Minority Leader Mitch McConnell (R-KY) was pressed over comments he had made last month, berating former President Donald Trump following his acquittal in the Senate last month.

Asked if he has “any regrets” about the statements, or if he would “take back” any of the comments that he had made on the Senate floor criticizing the 45th President, McConnell deflected, prompting Civil Rights attorney Leo Terrell to suggest that the Senate minority leader “looked very nervous”.

“Everyone remembers the very strong statement that you made on the floor with the regard to the January 6th riots at the Capitol. You were very strong in your words against the president. At this point, do you have any regrets about the statements you made on floor? Would you take back any of that today?” Martha McCallum asked Senator McConnell.

McConnell replied: “Well, look. I think the actions of the new Democratic administration are unifying the Republican Party. We’ve had some internal back and forth that’s been widely covered. But nothing has unified the Republican Party in both the House and the Senate faster than reacting to this new leftwing administration. We’re looking forward, we’re not looking backward. We’re looking forward dealing with the problems American’s have today, not the problems it had yesterday.”

“And as I’ve said in our conference, and I think in the House Republican conference as well, a new sense of unity, pulling together to oppose this leftwing administration,” he said.

McConnell also claimed that he did not watch the 45th President’s speech at CPAC, but said, “I think the American people expect from us is to stand up to this leftwing administration that’s taking this country in the wrong direction. We’re dealing with the present and the future, not looking back to the past.” Continued Below

“He betrayed President Trump. This is his last term in office. I guarantee it,” he added. Video Below

McConnell is reluctant to comment on Trump and his statement condemning him pic.twitter.com/Kjl0BPVeoJ

When asked about Trump going after Republicans over impeachment at CPAC, McConnell says he didn’t watch Trump’s speech pic.twitter.com/5LSGMfa3x0

Mitch McConnell looked very nervous during his interview on Fox. He betrayed President Trump. This is his last term in office. I guarantee it

President Trump: 75 million voters and I continue to support you!! #GodBlessAmerica #GodBlessPresidentTrump