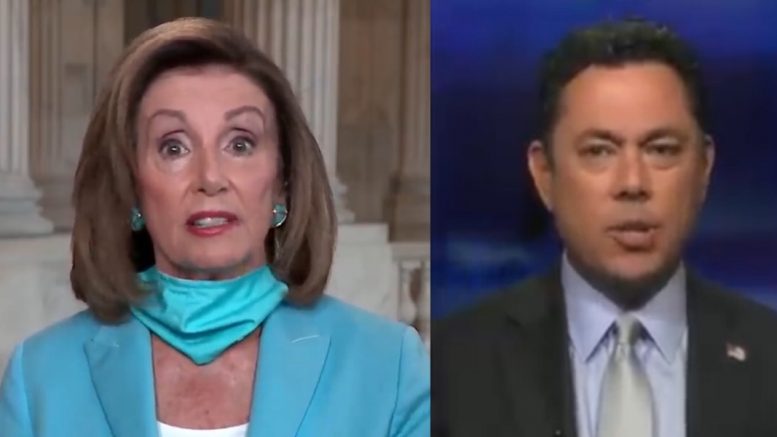 Former Utah Republican Congressman, Jason Chaffetz, said it’s “terribly irresponsible” of House Speaker Nancy Pelosi (D-CA) “to suggest that the Russians have something on” President Trump, and demanded that she “share that evidence” if she knows something.

This comes after The New York Times, alleged that the Commander in Chief had been briefed on reported Russian bounties placed on U.S. troops in Afghanistan, claiming: “The intelligence finding was briefed to President Trump, and the White House’s National Security Council discussed the problem at an interagency meeting in late March, the officials said.”

“I think it’s terribly irresponsible, just downright wrong, the Speaker of the House to suggest that the Russians have something on Donald Trump. Shame on her! If she has evidence, if she’s heard a briefing, if she’s done anything like that, then she needs to share that evidence,” Chaffetz insisted during a Monday interview on Fox News.

House Speaker Nancy Pelosi  (D-CA) said during an interview on ABC’s “This Week”, that she is unclear as to what “the Russians have on” President Trump, but added that it must have swayed his administration not to take action after U.S. intelligence learned that Moscow spies offered bounties to Afghan militants to kill U.S. troops.

Pelosi also claimed that throughout Trump’s presidency he has ignored allegations against misdeeds committed by Russia, but that the new reports on bounties “is as bad as it gets.”

“This is as bad as it gets, and yet the president will not confront the Russians on this score, denies being briefed,” Pelosi said. “I don’t know what the Russians have on the president, politically, personally, financially, or whatever it is. But he wants to ignore, he wants to bring them back to the G-8 despite the annexation of Crimea and invasion of Ukraine.”

Chaffetz went on to say: “To suggest that Donald Trump did something wrong in this case without seeing intelligence is just pure politics. It’s disgusting. It is fundamentally wrong with Washington, D.C.”.

“Everybody is denying it & there have not been many attacks on us Nobody’s been tougher on Russia than the Trump Administration. With Corrupt Joe Biden & Obama, Russia had a field day, taking over important parts of Ukraine – Where’s Hunter? Probably just another phony Times hit job, just like their failed Russia Hoax. Who is their ‘source’?” the president asked. Continued Below

Speaker Pelosi and Senate Minority Leader Chuck Schumer (D-NY) both said they did not receive intelligence reports about the attempted bribes, saying they “were not briefed on the Russian military threat”.

“The questions that arise are: was the President briefed, and if not, why not, and why was Congress not briefed,” Pelosi said in a letter to Director of National Intelligence John Ratcliffe and CIA chief Gina Haspel.

“Congress and the country need answers now,” Pelosi wrote. “I therefore request an interagency brief for all House Members immediately. Congress needs to know what the intelligence community knows about this significant threat to American troops and our allies and what options are available to hold Russia accountable.”

“The Administration’s disturbing silence and inaction endanger the lives of our troops and our coalition partners,” she added. “The President’s refusal to stand up to the Russians also jeopardizes lives in the region, as the Afghan government and the United States are engaged in critical peace negotiations with the Taliban.” Continued Below

Schumer called on Ratcliffe and Haspel to “immediately brief all 100 senators” on the reports. “We need to know whether or not President Trump was told this information, and if so, when,” Schumer tweeted on Monday.

Asked if Pelosi and Schumer would receive any kind of tip before the Commander in Chief over the New York Times report, Chaffetz said, “These briefings happen daily, there is an intelligence report in an assessment that is put together and shared with the gang of eight. It is shared with the president and the vice president of the United States.”

“To hear Nancy Pelosi go on television and start to say there is some nefarious tie between Donald Trump and the Russians, that is just playing into Russia’s hands. It is fundamentally wrong. It is politically disgusting, and absolutely, totally wrong,” he added. Video Below

The shocking reports about Russia’s bounty on American troops is as bad as it gets – and still, President Trump refuses to confront Putin. #ThisWeek pic.twitter.com/oeT0RgruOL

Trump Announces He ‘Will Deliver Remarks At A Major Rally In Cullman, Alabama, On August 21’