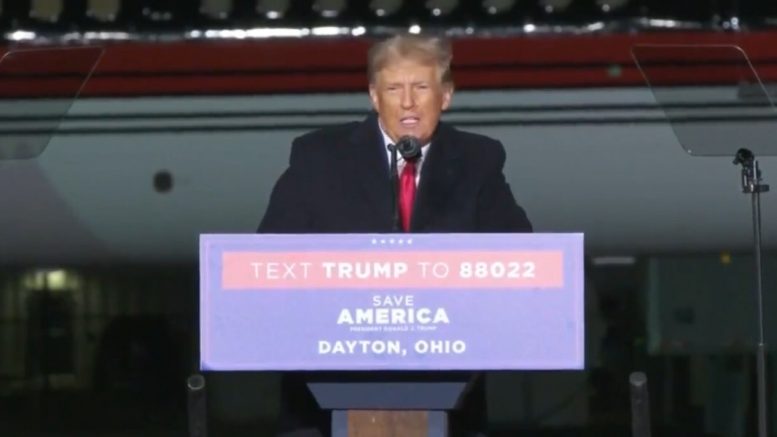 45th President Donald J. Trump said Monday, during a Save America rally in Vandalia, Ohio, that he will be “making a very big announcement” next week at Mar-a-Lago in Palm Beach, Florida

“Not to detract from tomorrow’s very important, even critical election, and I would say in the strongest way, it’s a country-saving election. … I’m going to be making a very big announcement on Tuesday, November 15 at Mar-a-Lago in Palm Beach, Florida,” President Trump announced.

“We want nothing to detract from the importance of tomorrow,” Trump said.

BREAKING: Donald Trump to officially announce his candidacy for President of the United States in the 2024 Election at Mar-a-Lago on Tuesday, November 15th pic.twitter.com/hWFOdabgjn

Following the special announcement, the 45th president named the America first candidates he supports and urged voters to make their voices heard at the ballot box on Tuesday.

The president ended his rally with “Hold on, I’m Coming” by Sam and Dave, dancing along to the tune.

A total lunar eclipse occurs when the Moon passes into the dark shadow of the Earth. Lunar eclipses are sometimes called “Blood Moons” because the Moon will turn a reddish hue. This happens when the Moon is in the darkest part of Earth’s shadow, which is called the umbra, Axios reports.