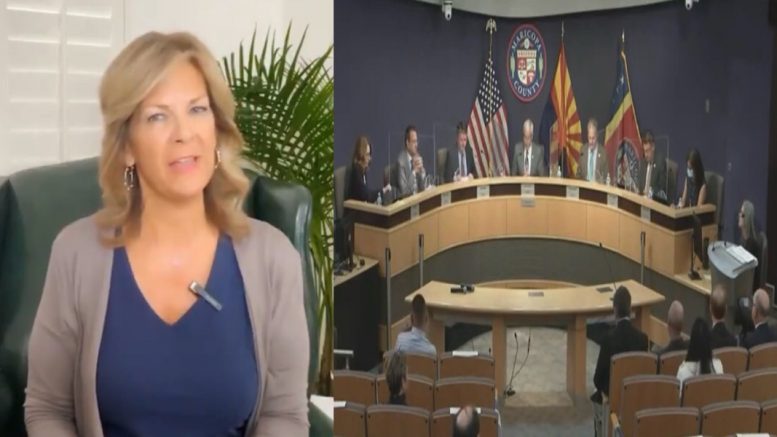 Arizona GOP Chairwoman Dr. Kelli Ward provided a second update Monday evening ahead of Tuesday’s meeting at the Arizona State Capitol regarding three serious issues that have arisen in the course of the Senate’s ongoing forensic audit into the 2020 November general election.

“We have just witnessed a political circus– unapparelled in the history of Arizona, in my opinion. A small group of elected officials from Maricopa County, who view themselves as above the law, above review, above reproach, just held a press conference in really a circle-the-wagon effort to protect their backsides,” Dr. Ward said of the Maricopa County Board of Supervisors’ meeting held on Monday.

Dr. Kelli Ward said the Maricopa County Board of Supervisors, during their meeting, launched “a broadside attack against the Arizona Senate, against Arizona voters, against the Republican Party, against individual Arizona legislatures, and basically, against anyone who disagrees with them,” she asserted.

“In the guise of protecting the election officials of Maricopa County from unfair attack, which has never happened, ever, their real motivation could not be more clear. Stop attacking them. Stop questioning their work and above all, stop the audit. After all, don’t you realize that what Dominion and the election office staff put in front of them looked just fine,” she sarcastically said.

“Of course, our concern from the very beginning stemmed from what was not put in front of them and may have even been kept from them,” Dr. Ward explained. “They want us to turn down the heat on them in regards to auditing the election so they can focus on what’s important, according to Supervisor [Bill] Gates. Supervisor [Steve] Chucri said, ‘The board has too much to do’– to concentrate on what the people are crying out for. … Election integrity is what we’re crying out for; it’s what we want.”

“Chairman Jack Sellers said he and the rest of them are going to ignore legislative inquiries and subpoenas. In other words, they’ll all be willingly and willfully in contempt of the Arizona Senate’s authority,” Dr. Ward said, referring to remarks made in the meeting on Monday by the Maricopa County Board of Supervisors. Continued Below

“(3). They say they want to cooperate with the Arizona State Senate and they want to keep politics out of the mix. Well if you actually listen to the press conference, there was no talk, zero talk of cooperation and a whole lot of political attacks, pointing fingers and dodging of responsibility. And a bunch of holier-than-thou elitist’s preaching to worried voters about they should and should not be concerned with,” she continued.

“Did you hear any answers to the very concerning questions that were asked by Senator Fann? I certainly didn’t,” Dr. Ward said of the meeting on Monday by the Maricopa County Board of Supervisors. Video Below

“… (5). Why do these local officials think that they alone are acting in good faith, while at the same time, questioning the motives and the character of those who disagree with them? And people who disagree with them are individuals elected to local, state, and federal offices who represent Arizona constituencies with real uncertainty about the integrity of our elections,” Dr. Ward explained. Continued Below

“It is crystal clear that members of the Maricopa Board of Supervisors … will not be attending [the] scheduled meeting on Tuesday as requested by the Arizona State Senate. Every single individual who spoke at this press conference has made it very clear that they will not entertain questions from any individual or organization that questions their work or their motivations. In their eyes, they are indeed above reproach, and they will boldly tell you that if you dare to challenge their perfection. … This audit will not end until it is indeed completed, and we have the questions we’ve been asking answered,” Dr. Ward added.

Maricopa Board of Supervisors response to Senator Karen Fann: