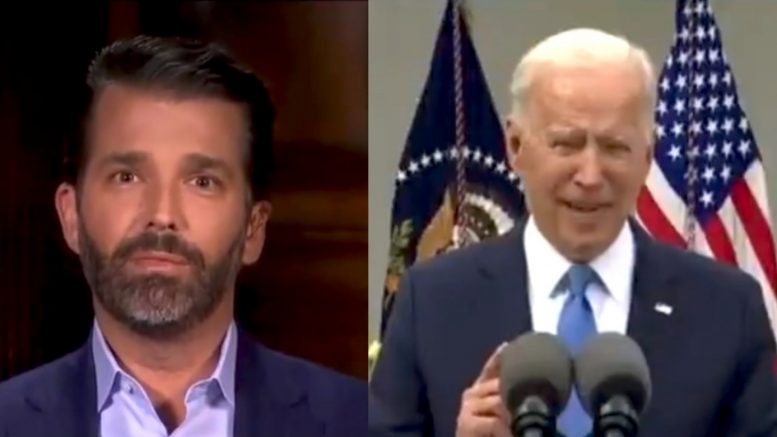 Donald Trump Jr. declared on Monday that he ‘underestimated’ Joe Biden’s overall leadership ability… but not in a good way.

Weighing in on several crises playing out in the United States and all over the world, Trump Jr. slammed Biden over his ‘disastrous presidency’ thus far, which he compares to that of former President Jimmy Carter.

“I was wrong about Joe Biden. I grossly underestimated him,” Don Jr. told Sean Hannity of Fox News. “I thought it would take him years to destroy America, and he’s managed to do it in a few short months.”

He continued, “I don’t know whether to be upset or impressed but as a father of five young kids, someone who’s an employer of lots of people all over this country, it’s really sad to see what’s going on and the media still is giving him every benefit of the doubt, trying to make excuses for what is utter incompetence.”

.@DonaldJTrumpJr says he was wrong about Joe Biden and he grossly underestimated him. He thought it would take him years to destroy America but he’s done it in just a few short months. The media is still trying to cover for his complete incompetence. pic.twitter.com/qcG0f6a2c9

Here are some more clips from Don Jr.’s interview:

.@DonaldJTrumpJr says The leftist media have been on the Palestinian side of this conflict for a long time. The anti-Jewish troops are absolutely disgusting and it’s not going to stop until more people start stepping up to call them out. pic.twitter.com/2wAIJYLMEK

.@DonaldJTrumpJr says our enemies are laughing their asses off at us. The only people that are in joying what’s going on is China, Russia, and Iran. They’re watching the destruction of America from within based on ridiculous incompetence. pic.twitter.com/PLIoNK8Scd

Rep Jordan: Dems ‘Weaponized Government’ Against 63 Mil Trump Supporters Cause ‘They Didn’t Like Us’