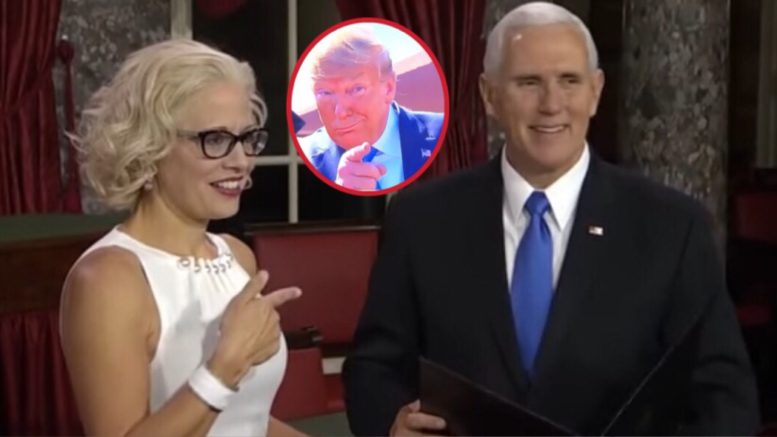 Sen. Kyrsten Sinema (D-AZ) is being accused of “voting too much in alignment with President Donald Trump” and the Processive Caucus of the Arizona Democratic Party is planning to punish her.

According to The Epoch Times, a censure vote will be held Sept. 21 at the party’s quarterly meeting in Prescott.

The resolution to be voted on Saturday states that Sen. Sinema voted for the confirmation of Attorney General William Barr, voted against net neutrality and voted to confirm David Bernhardt as Secretary of the Interior.

“Therefore, be it resolved that the Arizona Democratic Party censures Senator Kyrsten Sinema for failing to support the tenets of the 2016 Democratic Party Platform,” the resolution states.

Dan O’Neal, one of the signees of the resolution, told the Arizona Republic that the resolution is aimed to force Sinema to the left. (Continued Below)

“Here’s the thing: We really support Kyrsten Sinema, we want her to succeed, we want her to be the best senator in the country,” O’Neal said. “But the way she is voting is really disappointing. We want Democrats to vote like Democrats and not Republicans. “

“The Progressive Caucus is very concerned with Kyrsten Sinema’s voting record. We love her, as we love all Democrats, but we want her to vote like a Democrat rather than supporting Trump half the time,” O’Neal told ABC 15.

Earlier this year Sen. Sinema said, “I am 100 percent focused on the needs of everyday Arizonans, and I refuse to be distracted by the pettiness and the partisanship that has invaded Washington.”(Continued Below)

“I promised Arizonans that I would never be a part of that typical Washington chaos and drama and I’m going to continue to stay focused, just like a laser, on the stuff that actually matters to the people in their everyday lives,” the Arizona Senator added.

“Arizona rejected what has become far too common in our country, name-calling, petty, personal attacks and doing and saying whatever it takes just to get elected. It’s dangerous and it lessens who we are as a country, but Arizona proved there is a better way forward,” Sen. Sinema said.