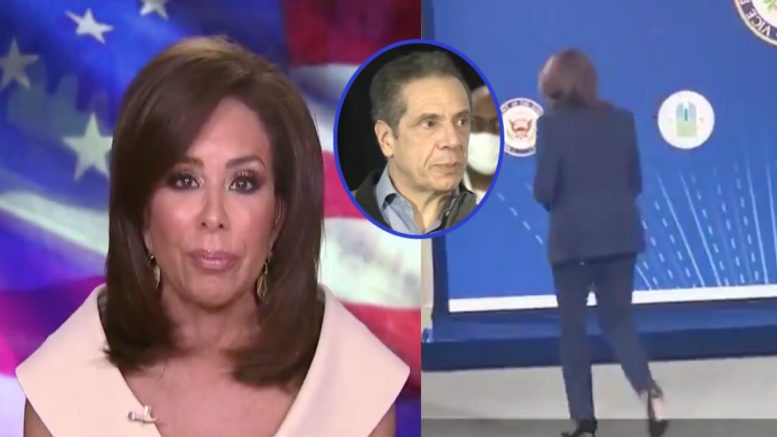 “Finally tonight, she is a fraud, a phony, a woman without a moral core, a regular two-faced mealy-mouthed politician who swings with the wind,” Judge Jeanine expressed of Harris.

“A real role model ain’t she? But remember, a woman who couldn’t get 1% of support in her Party’s presidential primary nomination. A women destined to be president– that many believe in the very near future– and who can’t even answer a question about whether or not Andrew Cuomo should resign after 7 women accused him of sexual harassment and assault,” the Fox News host explained.

“What is this woman afraid of?” Pirro wondered, before playing a clip of a reporter asking Harris on Wednesday if she has “any comment on Governor Cuomo”, which Harris ignored and quickly walked away.

“Some supporter of women, huh?” Judge Jeanie Pirro asked. “A woman paraded around as a champion for woman, quick to believe all women, unless it doesn’t work to her political advantage– a woman who once prosecuted cases on behalf of rape victims, who then turns around to raise money for the Minnesota Freedom Fund that bails out the men who rape women. This is certainly not the kind of woman we need running this country as president.” Video Below

"A woman who stands up for all women unless they are accusing a member of her political party unless it works to her political benefit…this is certainly not the kind of woman we need running this country as President." #CLOSINGSTATEMENT pic.twitter.com/9Prc65Gg9M

“I think the vice president’s view is she believes a woman should be treated with respect. Their voices should be heard. They should tell their story,” Psaki told reporters.

In March 2019, Lucy Flores, a former state lawmaker from Nevada, accused Biden of inappropriate touching and of kissing her head at a campaign event. Following that, six other women came forward to share stories of unwanted touching by Biden.

Biden said his touching was about making “a human connection,” but vowed to be more “mindful and respectful.” Continued Below

In April 2019, Harris said she believed the women who said they felt uncomfortable after Biden touched them. “I believe them, and I respect them being able to tell their story and having the courage to do it,” Harris said.

At that time, none of the allegations included rape or sexual assault.

In March 2020, though, Tara Reade, a former Biden Senate staffer, accused Biden of sexual assault. In April, Harris said in a San Francisco Chronicle podcast  she believes that “Reade has a right to tell her story”.