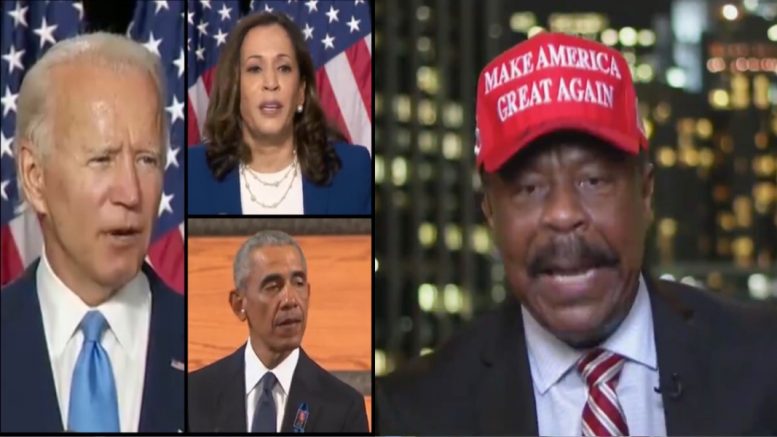 “First of all, before I answer the question, let me get my background set up,” Terrell told host Trey Gowdy, who filled in for Sean Hannity.

In reference to Senator Kamala Harris (D-CA) being chosen as Joe Biden’s running mate, Trey Gowdy asked Leo Terrell: “How do you acknowledge the historical significance of someone, while at the same time disagreeing with them on the issues, trying to defeat them on the issues?”

“The problem is very simple,” he continued. “Kamala Harris was picked for the wrong reasons. Kamala Harris was picked as a way to insulate Joe Biden from racism. Joe Biden, … has been a person who said, ‘Wait. Hey, if you don’t vote for me, you ain’t black’–‘Black people think the same way’. My point is simply this: [Former GOP UT Rep.] Mia Love, [Senator] Tim Scott, they were picked on merit. This country is about merit.”

“Kamala Harris is an affirmative action selection to insulate Joe Biden about the racist attitudes he’s had over the last 40 years. The one thing that Kamala Harris did say is true is that Joe Biden is a racist at the debate,” Terrell said. Continued Below

Leo Terrell was referring to when Kamala Harris challenged Biden’s opposition to federally mandated busing when he was in the Senate, telling the former vice president that she benefited from the program to integrate schools. The face-off produced Harris’ “That little girl was me” remark that drew widespread media attention.

“One final point: when you look at what Donald Trump has done the last three years, … First Step [Act], funding Black historical colleges– Trump is trying to give justice reform and police reform through the Senate, but for Cory Booker and Kamala Harris. Donald Trump has done more for Black Americans than Obama and Biden and Kamala Harris,” Terrell added.

In December 2019, President Donald Trump on Thursday signed a bipartisan bill that will permanently provide more than $250 million a year to the nation’s historically black colleges and universities, along with dozens of other institutions that serve large shares of minority students.

According to U.S. Department of Education records, the Trump administration has provided the most funding to historically black colleges and universities in the nation’s history for both undergraduate and graduate studies.

If you're one of those who might be triggered by the sight of @TheLeoTerrell donning a MAGA hat on live TV, go to your safe space and don't watch this clip.

I just spoke with the President and the First Lady. They love my #MAGA hat. #VoteTrump2020 . @realDonaldTrump @seanhannity @PARISDENNARD @KatrinaPierson @DonaldJTrumpJr @FoxNews

(Related: Leo Terrell: “If I Was Joe Biden, I Would Sleep With One Eye Open, Because [Kamala Harris] Is Looking To Take Over The White House”)

Sen. Kennedy Rebukes Sen. Harris For Implying That ACB Is ‘Lying’ About Pre-deciding Cases: “Are You A Liar?”