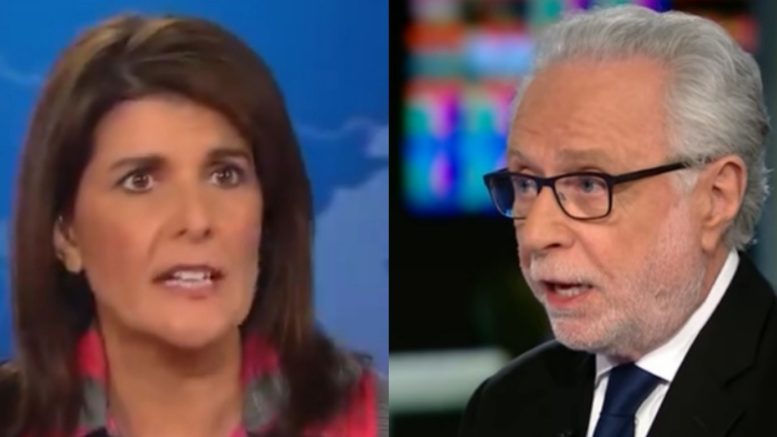 While facing CNN’s Wolf Blitzer, Nikki Haley slammed the mainstream media’s coverage of the impeachment inquiry and how it appears that news sources “want there to be something wrong.”

Haley made the remarks while discussing a hypothetical involving the upcoming testimony from Ambassador to the E.U. Gordon Sondland.

“If Ambassador Sondland says next Wednesday before the television cameras what he said in his revised addendum, in a statement that this was done to force the Ukrainians into engaging in a political investigation on behalf of the President for political purposes, what would you say?” Blitzer asked.

“Show me the proof,” Haley replied, adding “because I don’t see anywhere where the president heavy-handed the president of Ukraine and said ‘you have to do this or else.'”

“Look,” she continued, “I know you all want there to be something wrong, but at the end of the day, there is nothing that shows he threatened or that he held their hands saying ‘we’re not going to release until you do this,’ and that’s the issue.”

“And that’s obviously the problem in Congress and why they can’t come to a resolution on this,” Haley declared. Video Below

He then went on to ask Haley why she thinks the President is not allowing Mulvaney, Bolton and other current and former advisors to testify before the impeachment committee if his phone converstation is as “perfect” as he claims.

Haley replied: “I think if the president thought there was a genuine investigation, he would have no problem with them testifying. I think he feels like this truly is a witch hunt. And so, he has his backup. And he thinks this is just a way for you all to trick everybody into saying something.” Video Below

WATCH: "Show me the proof!"

Nikki Haley slams the media's coverage of the Democrats' Impeachment Hearings, saying "you want there to be something wrong, but at the end of the day" there's no proof President Trump did anything wrong.