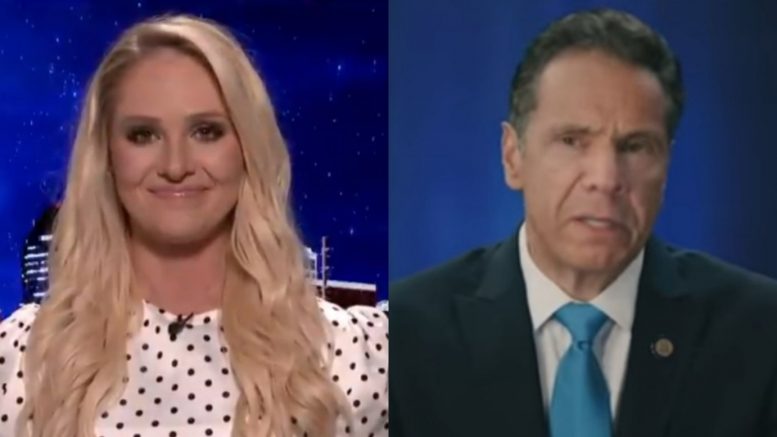 On Saturday night’s airing of Justice with Judge Jeanine, Tomi Lahren slammed New York Governor Andrew Cuomo for saying that he will not be “bowing to cancel culture” when signaling that he will not resign after a 7th accuser has stepped forward accusing the governor of sexual harassment.

“I did not do what has been alleged, period,” Cuomo said in wake of to the 7th accuser coming forward.

“People know the difference between playing politics, bowing to cancel culture and the truth,” Cuomo added. “Let the review proceed, I’m not going to resign.”

“Cancel culture is when usually liberals try to censor, try to deplatform or get somebody fired because of their ridiculous sensitivities. Cancelling cartoons, cancelling movies, books, conservative speakers — that’s cancel culture which, by the way, the left is usually more than happy to do.

“But it’s not when you have a governor who is no longer able to lead — somebody who has sent elderly Amrricans to an early grave, somebody who is an alleged sexual predator and is not able to lead the state that he has already run into the ground, largely, beyond these allegations. And say he should step down for the good of your state. That’s not cancel culture.

“But again, we knew that this was going to come back to bite liberals in the behind. They want to cancel conservatives and now they want to dig in their heels because cancel culture isn’t fair. It’s amazing how that works.” Video Below

.@kimKBaltimore and @TomiLahren are on to discuss how Governor Andrew Cuomo is refusing to resign even though seven accusers have come forward accusing him of sexual harassment and how the media is fawning over Biden’s speech this week. pic.twitter.com/b4DUuZVsvB

Leo Terrell Torches AOC’s Notion That There Is Not A ‘Surge’: “She Is A Menace To America”